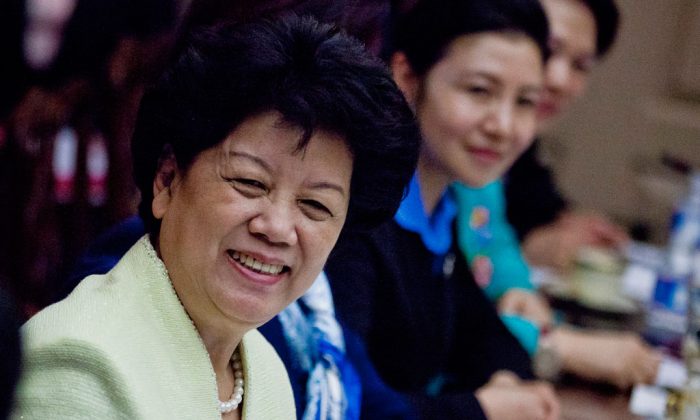 Chen Zhili (foreground), who was Minister of Education from 1998-2003 in the People's Republic of China before becoming vice-chair of the National People's Congress, sits at a table with U.S. Secretary of State Hillary Clinton at the State Department on March 28, 2012, in Washington, D.C. Chen pushed to commercialize education in China, which led to greater corruption in the industry. (T.J. Kirkpatrick/Getty Images)
China

China’s Ministry of Education has begun to investigate embezzlement of research funds at major educational institutions.

According to a statement on the website of the Central Commission for Discipline Inspection, the Ministry of Education will dispatch a total of eight inspection teams this year to audit eight universities or institutions.

Earlier this year, Shandong University and China University of Geosciences in Wuhan City, and the Central Audio-Visual Education Service have already been audited.

Most recently, on Oct. 15, five investigation teams were sent to audit the Communications University of China, Shanghai International Studies University, China Pharmaceutical University, the Secretariat of the China Scholarship Council, and the Institute of Applied Linguistics Education.

China’s official statistics show that funding of science and technology research in 2013 amounted to 500 billion yuan (US$82.2 billion). Total funds during the past 8 years was close to 3 trillion yuan (US$493 billion). However, only forty percent of the money was actually allocated to research projects, and 60 percent was spent otherwise), China Business News reported on Oct. 21.

For example, from 2008 to 2011 Shandong University of Finance filed 283,600 yuan (US$46,600) in travel expenses for two research projects alone. Travel expenses consumed 49.75 percent of the total project funds. The two research projects were the Weishan Tourism Planning and the Fucun Township Tourism Investigation. Weishan and Fucun are both historic sites in Shangdong Province.

In another example, Song Maoqiang, a former dean of the School of Software Engineering at Beijing University of Posts and Telecommunications embezzled 680,000 yuan (US$112,000) by making up a list of research staff when he served as the primary investigator of a research project at BUPT.

In 2013, Chen Yingxu, a professor of Zhejiang University instructed his doctoral student to forge receipts for non-existing contracts and make up fake expenses. In this way, Chen transferred over 10 million yuan (US$1.64 million) from a research fund into his personal account.

One of the six former medical researchers is Wang Guanjun, director of the First Affiliated Hospital of Jilin University and provost of Jilin University. The investigation of Wang began on Aug. 3, and on Aug. 20 Jilin Provincial Procuratorate filed a case and indicted Wang for embezzlement.

Chen Zhili, a former state councilor and education minister under former Chinese leader Jiang Zemin, pushed to commercialize the education sector. Driven by financial interests, schools began charging students all kinds of fees, and education became one of the ten most profitable, as well as corrupt, businesses.

When Jiang Zemin launched the persecution of Falun Gong in 1999, he also used Chen Zhili to persecute Falun Gong practitioners in the education system, thus education became a tool for political persecution.

After Xi Jinping became head of the CCP in November 2012, he began waging war against corruption, with members of Jiang Zemin’s faction heavily targeted. The education sector has naturally become a key sector in this war.