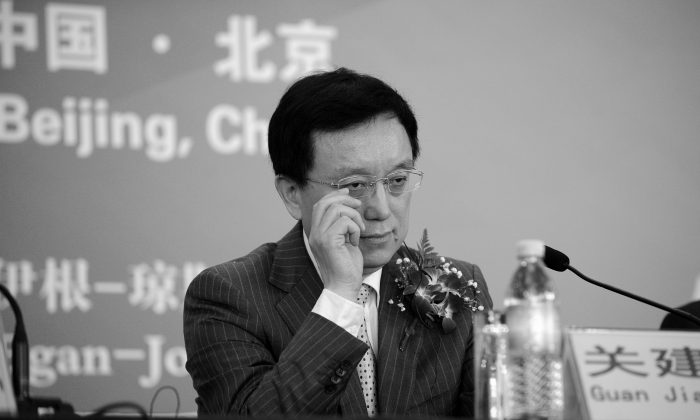 China has used the recent U.S. debt-ceiling debate and the government shutdown as a cover to push its ambition to become the world’s reserve currency. But is short-term U.S. weakness enough to bring about such a change?

“The renminbi is unlikely to become a prominent reserve currency—let alone challenge the dollar’s dominance—unless it can be freely converted and China adopts an open capital account,” said the IMF article.

The regime’s mouthpiece Xinhua thinks America’s temporary weakness is enough to label it as a country that is only out for its own prosperity and couldn’t care less about global economic stability.

The Chinese regime is using different tactics to damage the reputation of the United States.

Most recently, China’s state has used the Dagong Global Credit Rating Co. in its game against America. Dagong is the only rating agency in the world that downgraded the United States in mid-October.

Dagong downgraded the U.S. Sovereign Credit to an A- from an A Credit rating. It reasons the United States hovers on the edge of a default crisis and maintains its solvency only by using new debt to repay old debt.

“The fact that the debts grow faster than the fiscal incomes will further impair the federal government’s solvency,” states Dagong’s report.

Because of its straightforward approach, which seemed politically motivated, Dagong never got international recognition. “Initial efforts by Dagong to break into the big leagues were widely dismissed when in July 2010 it initiated its international research by giving U.S. government debt a lower credit rating than that of China,” stated a recent Wall Street Journal article.

“Apart from the symbolic meaning of the downgrade, though, Dagong’s move is expected to have no effect on markets,” said a recent Reuter’s article.

Dagong Part of the Chinese Regime

It is likely the Chinese regime uses Dagong Global Credit Rating Co. as another instrument to weaken confidence in the United States.

Ownership of Dagong cannot be ascertained, but it is closely associated with China’s Commerce Ministry, according to a 2010 article by the Wall Street Journal.

Dagong has been trying to get business from major markets, but has been mostly unsuccessful. For example, the company was denied the Nationally Recognized Statistical Rating Organization designation by the U.S. Security and Exchange Commission (SEC) in 2010.

“We find that we must deny Dagong’s application because, irrespective of the jurisdictional question, it does not appear possible at this time for Dagong to comply with the recordkeeping, production, and examination requirements of the federal securities laws,” the SEC stated in its September 2010 order.

Global Image of the United States and China

Nonetheless, many people believe China can one day surpass the United States as the world’s superpower.

At this moment, however, the United States still holds the No. 1 position in the world, according to a 2013 survey by the Pew Research Center.

However, Canada, with 67 percent of its people, Europe with 57 percent, and Latin America with 50 percent believe China has already become the new leading superpower. On the other hand, Asian, Middle Eastern, and African people, with 45 percent, 44 percent and 39 percent respectively, don’t think that China has made the grade yet.

China watchers said China’s regime is pushing its image through smooth talk, bribes, and other types of positive incentives. However, despite all its efforts the Chinese state still has a long way to go before it achieves the No. 1 world power status, if it manages at all.