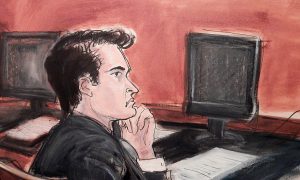 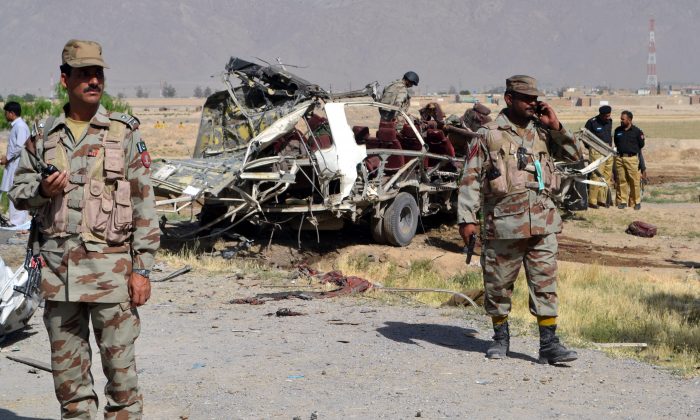 Pakistani security officials keep watch near a destroyed vehicle used by security forces following a bomb attack on the outskirts of Quetta, the capital of restive Baluchistan province, on May 23, 2013. (Banaras Khan/AFP/Getty Images)
China

China Wants a New Silk Road, but It Has to Get Past the Taliban First

A Chinese-funded conflict is brewing in Pakistan’s Balochistan Province, where extremist separatists and Taliban terrorists aren’t likely to just sit and watch as China builds roads, railways, and oil pipelines through the region.

Pakistan may be preparing “for the initiation of a massive military operation in Balochistan,” says an analysis from intelligence company IHS Jane’s. It says that Pakistan’s Prime Minister Nawaz Sharif held an All Party’s Conference on June 1 in Quetta, Balochistan’s largest city, intended to build “a consensus across political lines.”

The pending conflict is laying the ground for the Chinese regime’s China–Pakistan Economic Corridor (CPEC), also called the new Silk Road. The CPEC will run from Xinjiang Province in northwest China to the port of Gwadar in southwest Balochistan.

While the planned construction sounds good on paper, building it will be another story. In central and southern Balochistan are nationalist groups, including the Baloch Liberation Army, which according to Jane’s have previously kidnapped or killed foreigners, “especially Chinese,” to challenge Pakistan’s plans to develop the region.

Balochistan is also home to various Islamist groups, including splinter factions of the Pakistani Taliban, according to Jane’s. This is on top of the region’s organized crime networks that smuggle weapons, drugs, and diesel; as well as violent sectarian groups.

The Chinese will need to subdue these groups if the CPEC is going to work—and if similar attempts by the United States to stop violence in Iraq and Afghanistan say anything, it may have a hard time doing so. So the Chinese regime is passing this task to Pakistan, and at its request, Pakistan is building a new paramilitary force to protect the CPEC.

The Pakistani government agreed to spend $250 million to build the new security force, which should be trained and operational within three to five years.

Jane’s notes that it’s unlikely Chinese workers will show up until after the first phase of construction is completed. At that time, according to Jane’s, “if the Pakistan government has still not been able to control or eradicate militancy in the province, there would be an increased risk to Chinese assets and individuals.”