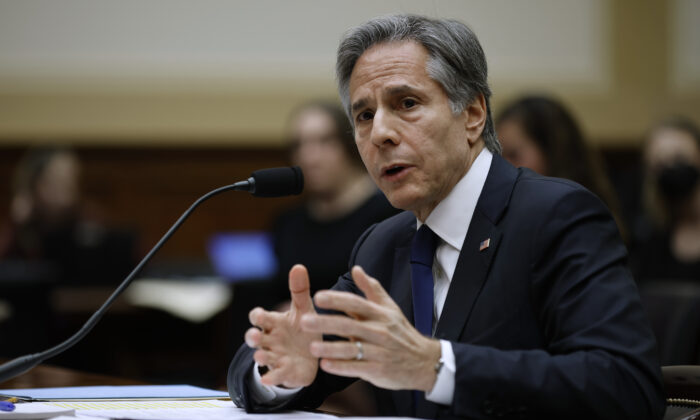 Secretary of State Antony Blinken testifies before the House Foreign Affairs Committee about the FY2023 budget request for the State Department in the Rayburn House Office Building on Capitol Hill in Washington on April 28, 2022. (Chip Somodevilla/Getty Images)
US-China Relations

The Chinese Communist Party (CCP) is using the United States’ free and open media platforms to spread state propaganda and misinformation, according to U.S. Secretary of State Antony Blinken.

Blinken said U.S. leadership is “deeply concerned” about the CCP’s efforts to quash press freedoms in mainland China while simultaneously exploiting free media in other nations to spread pro-Beijing messaging.

“We have a total imbalance, because these leaders in Beijing are using the free and open media that we ensure and are protected in democratic systems to spread propaganda, to spread misinformation,” he said.

Blinken made the comments as part of a speech recognizing World Press Freedom Day on May 3, during which he also highlighted the CCP regime’s efforts to leverage its financial ties with foreign corporations to either direct the content of foreign news companies or otherwise silence news that portrayed the regime in a negative manner.

The CCP released a document early in leader Xi Jinping’s tenure that listed the idea of a free press as a threat to communist rule in China, and directed Party leaders to combat the idea that the state shouldn’t control the media. Blinken noted that Beijing is now pressuring the press in Taiwan by leveraging China-based connections with the parent companies of news organizations.

“Taiwan is quite literally on the front lines of the PRC’s hybrid warfare, including misinformation, including cyberattacks,” Blinken said, using an acronym for the regime’s official name, the People’s Republic of China. “These are designed basically to distort the information environment and democratic processes.”

Blinken added that the United States is partnering with authorities in Taiwan and elsewhere to increase support for independent journalism and build “societal resilience” to misinformation and attacks on the free press.

His comments on the CCP’s efforts to exploit free media and otherwise stalk, harass, and surveil critics of the regime follow the announcement of several high profile criminal cases by the U.S. Justice Department that allege plots by Chinese agents to silence or even forcibly repatriate ethnic Chinese to mainland China.

In one such case, an alleged Chinese intelligence agent plotted to physically attack a U.S. Army veteran running for Congress. In another, agents hired private investigators in the United States to stalk and illegally surveil a U.S. Olympian who posted remarks online that were critical of the CCP’s continuing repression of Uyghurs in Xinjiang.

Blinken said, “We’ve been deeply concerned about what we’re seeing from the PRC in terms of its misuse of its technology to try to do things like increase surveillance, harassment, intimidation, [and] censorship of PRC citizens, of journalists, of activists, and others, and that includes abroad.”