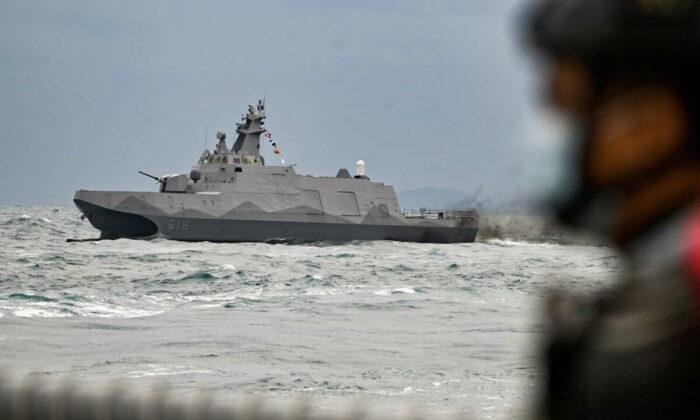 Taiwan's domestically produced corvette class vessel Ta Chiang is paraded to demonstrate its combat readiness during a drill on the seas off the northern city of Keelung on Jan. 7, 2022. (Sam Yeh/AFP via Getty Images)
Taiwan

China is holding military drills in waters south of Taiwan amid the escalating Ukraine crisis as the United States sailed a warship through the sensitive Taiwan Strait.

The military exercise, which began Feb. 27, will last three days in a six-nautical-mile radius off Hainan Island, which sits at the southernmost tip of China, China’s Maritime Safety Administration announced, as it warned ships to stay away.

While the province of Hainan is hundreds of miles southwest of Taiwan, the marine drill has attracted attention against the backdrop of Russia’s war on Ukraine. Beijing has long viewed self-ruled Taiwan as a breakaway province, to be reclaimed by force if necessary. With Russia’s aggression in Ukraine, questions are mounting as to whether China will be emboldened to proceed with a similar step.

The island raised its alert levels on Feb. 24, when Russian forces were confirmed to have pressed across Ukrainian borders. Taiwan’s President Tsai Ing-wen, while stressing the island’s geopolitical advantages, has ordered its army to be combat-ready 24/7.

Meanwhile, Beijing’s military harassment toward the island, which spiked last year, has continued.

The U.S. State Department didn’t respond by press time to a request by The Epoch Times for comment about China’s scheduled military drill.

Asked about the drill, a State Department said that the United States supports “a peaceful resolution of cross-Strait differences, consistent with the wishes and best interests of the people on Taiwan,” and urges “Beijing to cease its intimidation of Taiwan and instead engage in meaningful dialogue.”

“We have an abiding interest in peace and stability in the Taiwan Strait, and we consider this central to the security and prosperity of the broader Indo-Pacific region,” the spokesperson told The Epoch Times, reiterating that the U.S. support for Taiwan is “rock solid.”

A 7th Fleet spokesperson described the ship’s passage as a “routine” operation “through a corridor in the Strait that is beyond the territorial sea of any coastal State.”

“The ship’s transit through the Taiwan Strait demonstrates the United States’ commitment to a free and open Indo-Pacific,” the spokesperson said in a statement. “The United States military flies, sails, and operates anywhere international law allows.”

While U.S. Naval ships had transited the strait on a near-monthly basis last year, the Feb. 26 trip was the first since November.

The Chinese side characterized the move as “provocative.”

The United States is “trying to make some gestures to bolster the spirits of pro-Taiwan independence forces. This is hypocritical and useless,” said Senior Col. Shi Yi, a spokesperson for the Chinese army’s Eastern Theater Command, headquartered in Jiangsu Province.

The United States, like most countries, has no formal diplomatic ties with Taipei but is the island’s chief international backer and bound by law to provide the island with the means to defend itself.

This article has been updated with a response from the State Department.