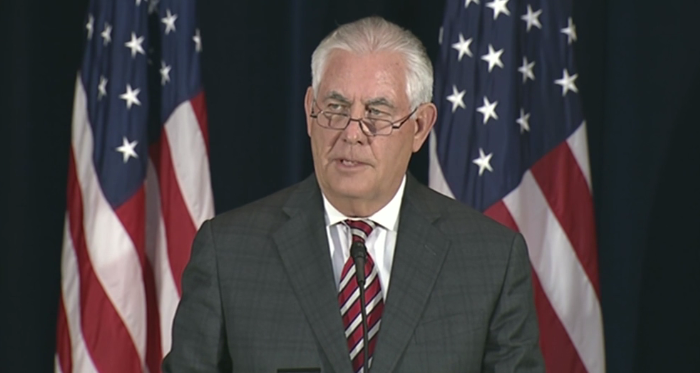 Rex Tillerson, Secretary of State, and James Mattis, Secretary of Defense, appeared in a joint press conference in Washington, on June 21, after meeting with Chinese officials for a defense and diplomatic dialogue.

The dialogue, which was agreed to earlier in April by Chinese leader Xi Jinping and U.S. President Donald Trump at the summit of Mar-a-Largo, highlighted the security risks posed by North Korea’s provocative nuclear weapons and ballistic missile program.

In the press conference, streamed live following the meeting with his and Mattis’ Chinese counterparts, Tillerson called the North Korean issue the “most acute threat today.”

The officials’ statements come a day after President Donald Trump wrote on Twitter saying that China and Xi Jinping had tried, but failed, in helping rein in North Korea.

Tillerson and Mattis maintained hope for continued collaboration between Beijing and Washington on the North Korean crisis.

Mattis stated that the meeting provided a “glimpse of the mutually beneficial future,” and reaffirmed “the shared goal of denuclearization” despite areas where China and the U.S. do not see eye to eye, notably territorial disputes in the South China Sea.

“The reason for this dialogue that we had today was to have an open and frank dialogue about what more can be done in areas of common interest.” “China’s end state on the Korean peninsula in terms of nuclear weapons is the same as ours,” Mattis said. “And we continue to work on that end state.”

‘Beyond any Kind of Understanding’

Diplomatic tensions have increased after the recent death of American student Otto Warmbier. Warmbier was arrested when traveling in North Korea and was released only recently. He died shortly after his release, on June 19, 2017.

As the chief ally and biggest trade partner with North Korea, China provides vital assistance to its neighboring communist country. In echo of international pressure, China has cut off coal trade with North Korea, but illicit commerce between the two countries still continues amidst complex internal Chinese communist factional politics.