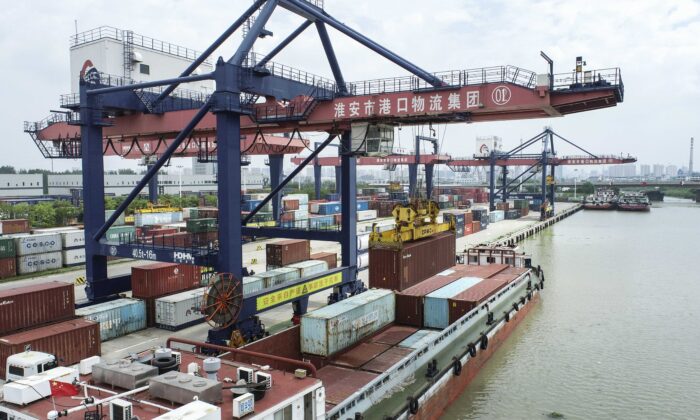 Forecasts of 1 percent gross domestic product (GDP) growth fell short in the second quarter as GDP indicated 0.4 percent growth. Retail sales were down by 11 percent in April, leaving them 0.7 percent lower than last year for the first six months of the year. Car sales were down by 10 percent during the second quarter, while the service sector was down by 0.4 percent, and youth unemployment reached 19.3 percent.

Although the economy improved in June, the second-quarter GDP number is the slowest pace since the COVID-19 pandemic started. For the first half of the year, growth was 2.5 percent compared to last year, a figure significantly lower than Beijing’s growth target of 5.5 percent for the year.

In May and June, Shanghai was under lockdown. That caused the city’s economy to contract by 13.7 percent in the second quarter. Although COVID-19 control measures in Shanghai and Beijing are easing, lockdowns are ongoing, with some areas being shut down over a single case. Chinese leader Xi Jinping officially remains committed to his zero-COVID policy, which continues to wreak havoc on the economy. As of July 11, 31 cities that make up a total of 17.5 percent of the country’s population and 25.5 percent of GDP were under full or partial lockdown.

Outbound shipments rose by 17.9 percent in June. Although China achieved a high trade surplus for the month, the rise in exports is expected to be temporary. The increase in exports may have been caused by a reduction in port congestion because of the reduction in domestic demand for imports.

The rising cost of imported commodities and other inputs is escalating the cost of manufacturing. At the same time, inflation in the United States and Europe is decreasing overseas demand for Chinese goods. As a result, Pinpoint Asset Management Chief Economist Zhiwei Zhang expects demand in the rest of the world to cool, in turn, suppressing Chinese exports in the second half of the year. A reduction in exports will result in slower economic growth and rising unemployment.

On the domestic front, the poor have become poorer in China as a result of lost income during lockdowns and the rising cost of goods. According to a survey by the Beijing Social Work Development Center for Facilitators, 73 percent of respondents reported that their income had decreased during lockdowns. Both the middle and upper classes, by contrast, increased their savings, with household savings increasing by $1.5 trillion in the first half of 2022.

People are hesitant to part with their money when they’re uncertain about future lockdowns. The rich, who can afford to spend, are another story. The sale of luxury goods is up, while the sales of staples and common consumer goods are in decline. Overall retail sales were down by 1.5 percent in June.

Housing demand is down and is expected to decline further as the population ages and the availability of mortgage funds declines. Investment in property development was down by 9.4 percent at the end of June. Additionally, new housing contracts are an indicator of the expectations of the middle class. Their unwillingness to commit to the purchase of a new home suggests that they’re pessimistic about the economic outlook.

Brokerage giant Beike, owner and operator of Lianjia, one of China’s largest housing brokerages, is predicting a decline in new housing demand by 2.5 percent per year through 2035. As real-estate-related industries account for more than 25 percent of the economy, slowdown in new housing development will send ripples throughout the entire economy.

Despite declines in economic activity, Beijing is still aiming for a growth target of 5.5 percent, but Goldman Sachs its China growth forecast to 3.3 percent for the year. The median forecast for China’s GDP growth across financial institutions is 4 percent.

In June, China experienced only modest, but growing inflation of 2.5 percent. This is up from 2.1 percent in May. The overall unemployment rate of 4.8 percent also isn’t terribly alarming. However, with youth unemployment at a staggering level, rising import prices, and an expectation of declining exports, China may find itself facing a recession or stagflation in the near future.

If stagflation occurs, experts expect China to be hit harder than many other countries because Chinese companies are so heavily leveraged. They represent 31 percent of global corporate debt. The risk of Chinese corporate defaults has increased to 22 percent because of high amounts of debt and decreasing revenue prospects.