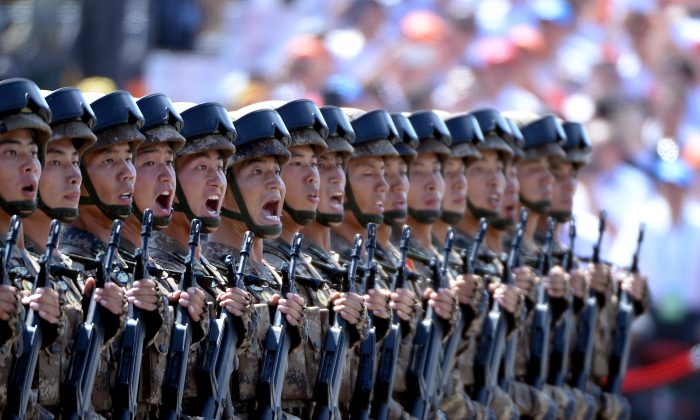 Chinese soldiers march in formation during a military parade in Tiananmen Square in Beijing on September 3. (Wang Zhao/AFP/Getty Images)
China

Although Chinese Communist Party leader Xi Jinping claimed that his plan to cut 300,000 troops was a gesture of peace, regime representatives immediately suggested the real agenda involved increased effectiveness. According to Chinese political analysts, Xi also had an eye on the dynamics of power within the regime in making the cuts.

Xi announced the cuts on Sept. 3 during a massive parade held to commemorate the end of World War II.  Immediately after the parade, a representative with China’s Defense Ministry said Xi was aiming for the People’s Liberation Army (PLA) to be “slimmer but more capable,” according to state news agency Xinhua.

Unofficial details of the troop cuts that were carried by Hong Kong newspapers and state media on the mainland over the following days confirmed the thrust for a more advanced and effective military.

“In the years that the military was under the control of Guo Boxiong and Xu Caihou, corruption became very serious.”
— Xin Ziling, retired Communist Party official

On Sept. 4, the South China Morning Post (SCMP), a Hong Kong-based English language daily, revealed that at least 170,000 army officers across the junior and senior ranks would lose their jobs in a restructuring of military commands in the land force.

Some army corps would be turned into air or marine corps, and up to 100,000 military personnel from noncombat units—artists brigades, medical, and communications—could be laid off, according to SCMP, which cited sources close to the PLA.

More information about the troop cuts were to be found in the state-run People’s Daily two days later. The army, air force, and marines are set to replace their outdated equipment with modern combat systems, military units would be restructured to require less manpower, and there would be a shift away from the army toward the other two arms, according to People’s Daily, citing comments made by military experts to the nationalist news outlet Global Times. That Global Times report has since been taken offline.

The changes are in line with what most Western military analysts are saying about the troop cuts: the 2.3 million-strong Chinese military is currently too reliant on ground forces, and there would be an effort boost the other arms, and make China’s military more high-tech, efficient, and able to project power.

China watchers and commentators of Chinese political culture, however, also view the troop reductions as yet another move by Xi Jinping in his drive to weed out the elements in the military that are closely associated with his predecessor Jiang Zemin.

“In the years that the military was under the control of Guo Boxiong and Xu Caihou, corruption became very serious,” Xin Ziling, the former chief of the editorial desk at PLA’s National Defense University, told NTD.

Guo Boxiong and Xu Caihou, both former deputy heads of the powerful Central Military Commission, were recently found guilty of selling military posts and accumulating massive wealth, and were purged under Xi Jinping’s anti-corruption campaign. The anti-corruption campaign is widely viewed as Xi’s attempt to rid the Party of Jiang’s men, install his own people, and consolidate power.

Xin added: “Many unqualified people took on different military posts or got promoted simply by bragging, flattery, or bribery. So these people need to be removed” through the troops cuts.

Hua Po, an observer of Beijing political affairs, told the global radio network Sound of Hope that cutting troops from the artists brigade is a bid at removing Jiang’s legacy.

“Jiang Zemin relied heavily on literary soldiers to show that China enjoyed peace and order,” said Hua. “Literary soldiers” refers to a group of entertainers in the military who perform pop songs in public. Under Jiang, they moved up the military ranks very quickly, acquired huge wealth, and “brought a terrible culture to the military,” Hua said.

So Xi, whom analysts believe demonstrated his consolidated power over the military with the Sept. 3 parade, “could issue an order and make most of these literary soldiers retire,” Hua said.