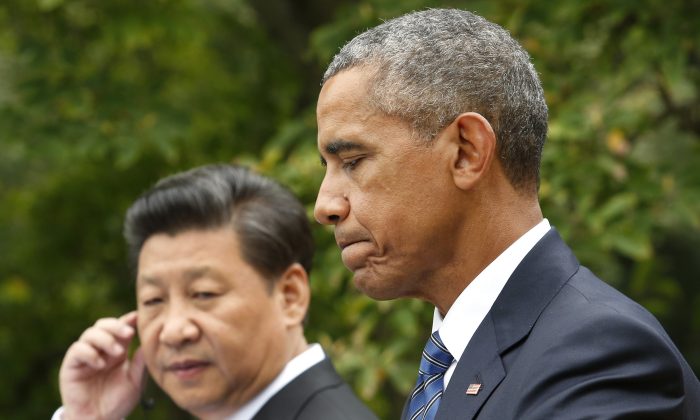 US President Barack Obama speaks next to Chinese President Xi Jinping at a joint press conference after their meeting at the White House in Washington,DC on September 25, 2015. (YURI GRIPAS/AFP/Getty Images)
China

U.S. leaders sealed their Sept. 25 cyber agreement with the Chinese regime recently, sending it a list of Chinese hackers identified as having stolen commercial secrets from U.S. businesses, and requesting their arrests.

In an unexpected turn of events, Chinese authorities actually made some of the arrests. Now, experts and U.S. officials are paying close attention to whether China prosecutes the hackers.

But while this makes for an interesting show, the new developments do not, by any means, spell an end to Chinese state-sponsored economic theft.

The opposite may be more likely: By passing evidence on Chinese hackers to Chinese authorities, the United States might unintentionally help the Chinese regime close gaps in its system for economic theft.

More seriously, however, is what type of evidence U.S. authorities will hand to Chinese Communist Party representatives when they gather enough evidence for arrests. If the hackers stand trial in China, they’ll not only need information on allegations, but also proof that shows how the information was gathered.

Chinese authorities could very easily take this information as a road map for how U.S. investigators are detecting attacks. Using this information, they could adjust their methods each time and make the cyberattacks progressively more difficult to pin down.

The result could be that Chinese state-sponsored cyberattacks not only continue but become even more difficult to detect.

First, the agreement only forbids, as President Obama puts it, “cyber-enabled theft of intellectual property.” This does nothing to address intellectual theft through the Chinese regime’s various other means.

And being the opaque system that it is, the Communist Party has plenty of leeway to play U.S. authorities for fools.

It would be simple to put on show trials and let the hackers go free afterward, while telling U.S. authorities that they’re serving time behind bars. It would also be easy for the regime to pin the blame on unrelated, innocent parties.

The only time it could be verified that the Party had arrested the right people would be in the rare cases that U.S. authorities could obtain photographs and detailed profiles of Chinese hackers. For those keeping track, they’ve only been able to publicly identify around six specific hackers over the last decade, according to publicly available information.

The biggest piece left unmentioned, however, isn’t about the hackers at all. The part being missed is that the Chinese Communist Party is behind the attacks—and what the United States really needs is proof that the Chinese regime has dismantled its massive system for economic theft.

None of this appears to be in the cards, or even under discussion.

As this newsletter reported last week, the agreement only addresses a small part of the overall system for Chinese state-run economic theft. Hackers get the most attention, but the Chinese regime also uses a vast network of insiders—old-fashioned human spies—who carry out this work.

The insiders working on Chinese economic theft operate in the sister department to its military hackers: the General Staff Department, Second Department.

And this is not to even speak of the individuals lured or coerced to spy for Chinese state-run companies. This often includes Chinese researchers, students, professors, and individuals already working in key U.S. companies.