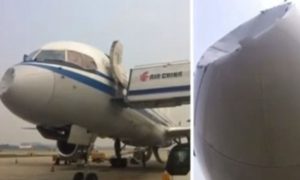 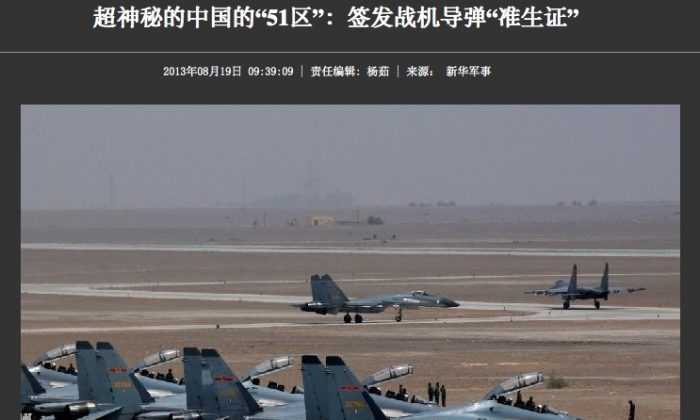 Photo of fighter planes on the front page of the Xinhua report claiming the existence of Area 51 in Inner Mongolia. (Screenshot/Epoch Times)
China

China Says It Also Has an Area 51, in Inner Mongolia

The CIA released a map of the Nevada site, along with other information, including details of the U-2 aircraft missions that supported the Tibetan rebellion against the Communist Party.

Xinhua on Monday published photos of a secret military base in the Badan Jilin Desert, that has supposedly never been shown on any official maps. The People’s Liberation Army (PLA) set up the site to test ballistic missiles and aircraft, Xinhua says.

One of the images shows a sign at the site entrance saying, “those who steal secrets will be caught and executed.”

The Xinhua report said the area began in 1958 as two shooting ranges, but they were combined in 2003 to test air-to-air missiles using the PLA’s fourth-generation fighter planes.

Chinese Internet users mocked the claim on their Sina Weibo microblogs. One netizen said: “How can you call it ‘Area 51?’ They probably locked up petitioners there. What a huge laughing stock.”

Another commented that the Communist Party appears to be copying the Americans, saying, “Whether there’s really an ‘Area 51’ in China cannot be proved by bluffing and putting up a few photos. Don’t pick up a rock and drop it on your own feet.”