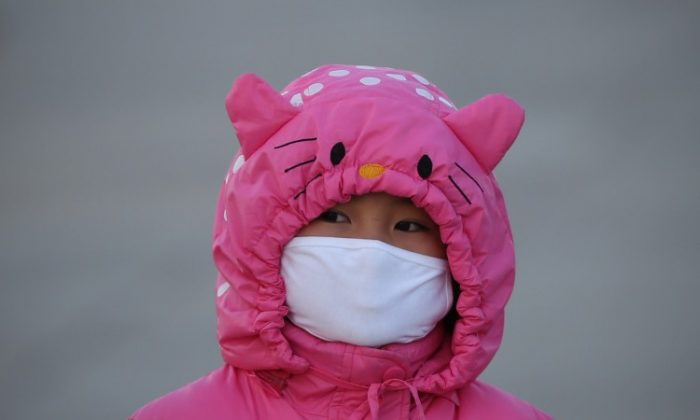 A girl wears a mask at the Tiananmen Square on Jan. 17, 2013 in Beijing to protect against air pollution. (Feng Li/Getty Images)
China

The dense, suffocating smog that has lingered over Beijing and eastern China over the past several days affects South Korea too, according to reports on Thursday.

The smog that has enveloped China has been described as one of the worst incidents of its kind in years, with tiny dust particles reaching a density of more than 990 micrograms per cubic meter on the PM 2.5.scale–far higher than the safe levels outlined by the World Health Organization, who says that a safe level is no more than 25.

“Our country’s air pollution is affected by air pollution in China, because pollutant substances are blown in by westerly winds,” Oh Young Min, an official with South Korea’s ministry of environment, told the Financial Times.

Nitrogen oxide is a byproduct of automotive emissions and coal burning–something that China does on a vast scale. Over the past decade, China has used coal power plants to fuel its massive economic growth and is now the largest consumer of the energy source in the world. But the negative effects of burning mass quantities of coal are now catching up.

Oh Young Min said that some 40 percent of nitrogen oxide in South Korea comes from China. Nitrogen oxide is a generic term used for various gases produced during combustion, and can cause acid rain, respiratory issues, and other environmental problems.

“The recent smog in Korea is a mixture of air pollutants coming from China, water vapor, and polluting substances (mixed into the snowmelt),” said Kim Jong Choon, an official with the National Institute of Environmental Research.

Over the past several days, the amount of PM 10 (ultra-fine air particles smaller than 10 micrograms) was much higher in several Korean cities than the maximum accepted levels of 100 micrograms per cubic meter. In Seoul, it reached 218, Busan reached 272, and Daegu was at 235, according to Kim.

“The particulates may cause respiratory diseases. Further examinations for secondary pollution of soil and water are needed,” Kim told the website.

Some of the pollutants might also not only be man-made, as South Korea has long been forced to deal with “yellow dust storms” blowing from the Gobi desert in northwestern China and Mongolia. But these storms also carry a vast array of air pollutants that are produced in China’s industrial, coal-fired region.

According to the Financial Times, these dust-fueled storms are rare in the winter time and tend to flare up in the spring.

Choi Jun Ho, the head of Friends of the Earth Korea, an environmental group, told the Times that while South Korea needs to curb domestic pollution, there also needs to be dialogue with China about solving the problem.

Speaking with AsiaOne, Choi said that emissions of PM 2.5 particulate matter should be regulated carefully because such particles are more harmful and linger longer in the human body.

Choi called for a meeting between environment ministers from South Korea, China, and Japan to discuss the issue.