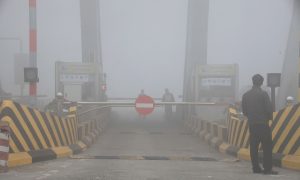 An 8-year-old girl has recently been diagnosed with lung cancer in China’s eastern province of Jiangsu, giving China the dubious distinction of being home to one of the world’s youngest lung cancer patients. Doctors attributed her illness to smog, and in particular the particulate matter in the smog of 2.5 micrometers in size, called PM2.5, which penetrates deep into the lungs.

Doctor Feng Dongjie at Jiangsu Cancer Hospital said in Chinese media reports that long-term inhalation of “road dust,” a concoction of exhaust fumes, sand, and generally polluted air, led to the lung cancer. She was living in a house located on the side of a busy road.

In particular, he said, inhalation of PM2.5 had made the greatest contribution to her contracting the cancer. PM2.5 pollution is created by motor exhaust as well as general industrial emissions.

The Chinese regime’s own Chinese Academy of Social Sciences, and the China Meteorological Administration, on Nov. 4 released its “2013 Climate Change Report,” also called “The Green Book.” It says that smoggy weather damages the respiratory, cardiac, and immune systems, and can even impact reproduction.

A large number of Chinese people have complained on social media that “the smog is going to ruin China,” “China will be finished soon.” Some simply posted the plaintive comment: “What can we do?”

Many Chinese Internet users have taken the opportunity of the lung cancer news to express their dissatisfaction with the Chinese regime’s efforts to combat smog, despite many media reports indicating that the Communist Party sees it as a priority.

“How many children do we have to sacrifice to raise their attention? When is the government going to do anything?” one user wrote.

“I feel very sad when I think of that there’s no other way [to protect myself] in addition to wearing a mask!” Gloria-Su Jingyang remarked, adding angry faces.

“You must wear a mask! This is truly a habit you have to build up!” said Wang Douma, a Beijing netizen.

Chinese are not the only ones complaining about the country’s polluted air. Korean and Japanese media channels have taken to airing their concerns, too, arguing that smog from China is impacting their own daily lives.

KBS Television of Korea calls Chinese smog “the most severe air pollution in human history” in a report on Nov. 3.

China’s coastal regions, including Beijing and Shanghai, have racked up an increasing number of smoggy days over the past 10 months, according to data from the official “The Green Book.” The report says that 2013 has registered the most smoggy days over the last 52 years in China.

On average, from 25 to 100 days every year are smoggy in different coastal areas, the book says; some areas suffer more than 100 smoggy days—meaning that nearly a third of the year, pollution is so thick that it can block out the sun.

Every year, 2.7 million people die from cancer in China, while 6 people are diagnosed with cancer every minute, according to the 2012 China Oncology Annual Report, a major official study. Pollution is believed by experts to contribute to cancer, and lung cancer is the most prevalent form recorded, with the highest mortality rate.

There are more lung cancer patients in big cities than in rural areas in China, due to the air pollution, the “Oncology Report” says. And the incidence of lung cancer has been going up, surely and steadily, in recent years.