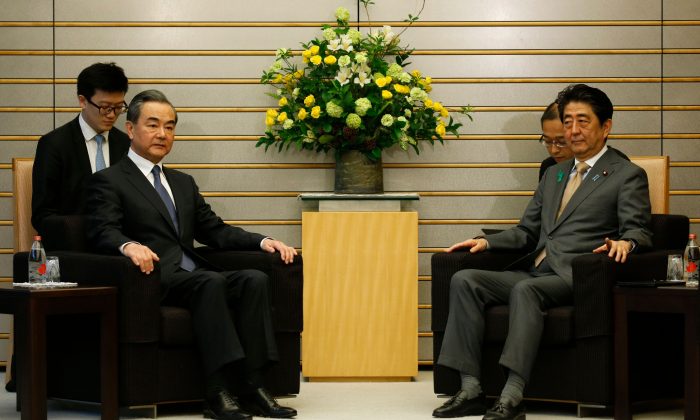 For eight years, China and Japan had been in a standoff over territorial rights to the Senkaku Islands, a group of uninhabited islands in the East China Sea controlled by Japan.

High-level bilateral talks were put on hold—until this week.

When Wang arrived at Narita airport the day before, he brought along with him China’s minister of finance, Liu Kun, and head of the Department of Commerce, Zhong Shan.

That same day, a 25-member military delegation led by Chinese major general Ci Guowei also arrived at the airport for a defense personnel exchange. Such meetings had been on a six-year hiatus, according to Japanese broadcaster NHK.

According to a scoop reported by Japanese newspaper Nikkei Shimbun, the Chinese high-level officials were sent to Japan on orders from vice chair Wang Qishan to “resume dialogue and improve relations.”

Why were the Chinese suddenly so eager to warm to Japan?

In a Voice of America (VOA) report, Tonosuke Sakai, the former chief editor of a magazine on China issues published by Japan’s Kyodo news agency, noted the particular timing of Wang’s meeting—just before Japanese Prime Minister Shinzo Abe was to meet U.S. President Donald Trump from April 17 to 18. The reason China is using such scale and speed to improve relations with Japan is to “target the cracks in Japan-U.S. relations recently, to take advantage of it and lure Japan into splitting apart the U.S.-Japan alliance,” he told VOA on April 17.

The United States is in a trade conflict with Japan: the former imposed tariffs on imported steel and aluminum from a list of countries, including Japan, and did not provide an exemption as it did with Canada and European Union nations.

Trump has also been eager to negotiate a two-way free trade agreement with Japan aimed not only at market access but currency policies—which Tokyo wants to avoid.

Another touchy subject is North Korea. Japan had recently been left out of denuclearization negotiations in the lead-up to Trump’s future meeting with North Korean communist dictator Kim Jong Un. During the meeting with Trump, Abe will seek a U.S. commitment that any denuclearization deal Trump seals will include not just long-range missiles but those that could be aimed at Japan.

Nevertheless, Trump has forged close ties with Abe during his 15 months in power and the two have bonded over rounds of golf during Abe’s last visit to Florida more than a year ago and Trump’s visit to Tokyo last November.

On the first day of the Abe-Trump summit, Reuters reported that Trump agreed to Abe’s request to bring up the issue of Japanese nationals abducted by North Korea during any meeting with North Korea.

Sakai also pointed out that historical animosity between Japan and China—stemming from World War II, and coupled with continued territorial disputes in the South China Sea—will make it difficult for the two countries to form a true alliance. Abe may seek economic cooperation, such as Japan participating in China’s One Belt, One Road initiative or pushing for China to open its financial sector to Japanese participation, in order to boost popular support back home, Sakai said.