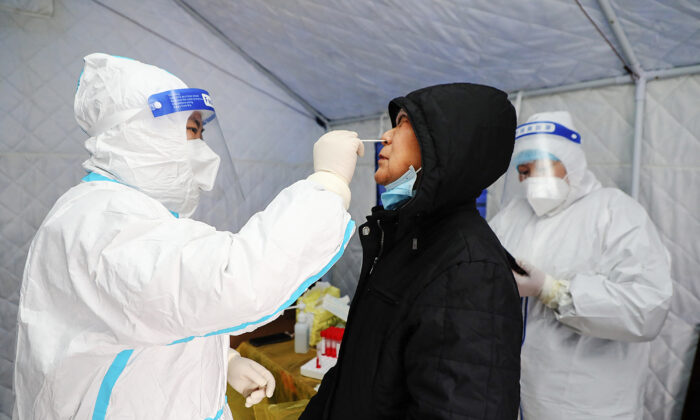 A resident undergoes a nucleic acid test for COVID-19 in Manzhouli in the northern Inner Mongolia region, China, on Nov. 29, 2021. (STR/CNS/AFP via Getty Images)
CCP Virus

The Chinese authorities on Dec. 14 reported its second case of the Omicron variant in a 67-year-old man who tested positive after more than two weeks of quarantine.

The infected person, who lives in the southern city of Guangzhou, returned to China on Nov. 27, according to the Guangzhou Municipal Health Commission.

He first experienced a two-week centralized quarantine in Shanghai, during which he repeatedly tested negative for the virus. After flying from Shanghai to Guangzhou on Dec. 11, he started another week of isolation at home.

The man received his positive result on Dec. 13. He was confirmed as a case of Omicron variant on Tuesday after the Chinese Center for Disease Control and Prevention reviewed the gene sequencing.

Omicron is the latest variant of the CCP (Chinese Communist Party) virus, which causes COVID-19.

Guangzhou health authorities said the patient is being treated in isolation in a hospital. It didn’t give further details.

The infection comes a day after the first case of Omicron was reported in China’s port city Tianjin. The first patient who arrived on a flight from Europe earlier this month tested positive on Dec. 9 while in quarantine. Unlike the second case, the first case showed no symptoms of illness, according to Chinese health authorities.

Poland’s Health Ministry said Tuesday the traveler was a Polish teenager who flew from Warsaw to China. Ministry spokesman Wojciech Andrusiewicz said the teenager, who traveled with her mother, was hospitalized in isolation.

The cases of Omicron prompted the authorities to double down on its zero-COVID approach of mass testing and mandatory quarantines, which come at the cost of people’s freedom.

After confirming the second case, Guangzhou tested 10,544 people for the virus and all returned with negative results, said state-backed media on Tuesday.

According to the report, thousands of people living in the same residential building where the infected man resides had been sent to centralized quarantine.

Chen Bin, the deputy director of Guangzhou health commission, said at Tuesday’s briefing that the authorities would assign more residents with a yellow health code, meaning they are required to take nucleic acid tests.

The color code on a state-mandated smartphone app decides whether Chinese residents’ movement would be restricted. People who lose a green code would be barred from taking public transport, entering shops, and even leaving their homes.

The country’s authorities are on high alert for a potential outbreak ahead of the Winter Olympics. Beijing is scheduled to hold the Game in February next year amid growing calls for boycotting the games in protest of the country’s poor human rights record.