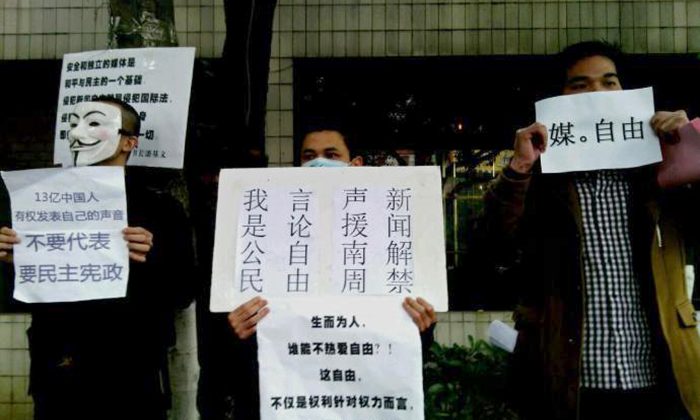 Demonstrators call for press freedom in support of journalists from the Southern Weekend newspaper outside the company's office building in Guangzhou, south China's Guangdong Province on Jan. 8, 2013. Chinese authorities have ratcheted down freedom of the press further recently. (AFP/AFP/Getty Images)
China

Journalists in China have been banned from writing articles deemed “critical” about the government or even about companies without permission, according to a recent announcement from China’s propaganda authorities.

Violators could have their licenses to practice journalism, or in the case of a publisher, its publishing license, revoked, the notice said.

Six of the eight cases highlighted by propaganda authorities allegedly involved journalists who had attempted to extort the targets of their stories.

Such activities indeed take place in the recesses of China’s repressed news industry—though analysts are more apt to blame the communist authorities for their overbearing restrictions on reporters, rather than the moral turpitude of journalists themselves.

In one of the cases, Zhou Xiang, a reporter at the state-run Maoming Evening News in Guangdong Province, was sentenced to two years and three months in prison in March.

Zhou was accused of bribery after he took 26,000 yuan ($4,173) from 13 companies and individuals, whom he apparently threatened to run negative reports about if they didn’t pay up.

Such reports would have included claims that they polluted the environment, neglected industrial accidents, or were involved in illegal housing projects. The truth status of the charges was not clear from the reports. Apart from Zhou’s jail time, he has been barred from practicing journalism for the rest of his life.

But whatever the abuses of journalists—real or fabricated—Chinese public opinion has not taken kindly to a blanket prohibition on “negative” coverage.

“Extortion is extortion, and critical reporting is critical reporting! How could extortion lead to a ban over the other?” said Chinese lawyer Chang Xiaokun, based in Shandong Province, on Weibo, a popular social media website in China.

“The constitution says citizens have the freedom of speech, which includes freedom to criticize. Aren’t journalists also citizens? If criticism is not allowed, the nation is finished!” wrote an outraged Song Zude, a well-known commentator of the entertainment industry, on his Weibo page.

Yang Bo, a regular Internet user, wrote: “Journalists often use Weibo to expose corruption without the permission of their companies. Now they don’t dare do that any more, and corrupt officials will sleep well.”

Chinese of a more pessimistic bent were not surprised by the announcement, because suppression of the media has never changed under Party rule. The notification simply announces the status quo, these commentators said.

Even before the new prohibition, many Chinese journalists have been punished for reporting negative news on a variety of social issues. Xiang Nanfu, for instance, who was based in Beijing and wrote for the overseas media Boxun, was arrested last month on suspicion of “picking quarrels and provoking trouble.”

But much of what Boxun reported about included the violation of human rights of petitioners and other disenfranchised groups in China.

Other reporters have been punished for simply doing their jobs. Before the 25th anniversary of the June 4 Tiananmen Square massacre, Xin Jian, with the Japanese newspaper Nihon Keizai Shimbun, and Vivian Wu, a former Beijing-based reporter for the South China Morning Post, were detained after interviewing Pu Zhiqiang, a well-known human rights lawyer who is now also in custody and faces a potentially lengthy imprisonment.