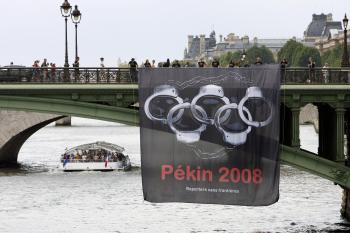 Human rights in China are deteriorating in the lead-up to the Olympic Games, say rights organizations, as Beijing authorities round up dissidents and members of persecuted groups to hide them from the media throng now descending on Beijing. (Bertrand Guay/AFP/Getty Images)
Opinion

Human rights in China are deteriorating in the lead-up to the Olympic Games, say rights organizations, as Beijing authorities round up dissidents and members of persecuted groups to hide them from the media throng now descending on Beijing. In response, some rights groups have offered up guides to help journalists find those hidden stories.

The Coalition to Investigate the Persecution of Falun Gong (CIPFG) has released a map of Olympic sites with directions to nearby forced labour camps in Beijing, Qingdao, Shanghai, Tianjin, Qinhuangdao, and Shenyang—cities where Olympic events are to be staged in as little as a week’s time.

“When you discover how close some of these hellholes are to Olympic venues, it's sickening," says Clive Ansley, China Monitor for Lawyers' Rights Watch Canada and North American President of CIPFG.

The guide includes seven maps and photos of the outer façade of each camp. Some resemble shopping malls.

The guide also details products made by inmates who show nothing less than Olympian endurance as they work 16-18 hours a day packaging disposable chopsticks labelled “hygienic” in jam-packed, filthy cells, without the water necessary to wash their hands.

Prisoners in other camps are hard-pressed to appreciate the irony of being denied the right to bathe because of failure to package 5,500 bars of soap in a single day, as the report alleges.

CIPFG’s report, “Torture Outside the Olympic Village: A Guide to China’s Labour Camps,” includes phone numbers for the labour camps as well as for the local “surveillance offices.”

Getting a hold of your local “surveillance office” may be as easy as saying “Falun Gong” or “Free Tibet” near your cell phone, according to Human Rights Watch (HRW). That organization has also published a guide designed to assist journalists travelling to the Games.

HRW insists foreign journalists need not feel lonely: “You should assume that in most public places you are being filmed on closed-circuit television, that your cell phone can send information about where you are, [and] that your email and other communications may be monitored.”

A pragmatic crash course in Orwellian subterfuge, the HRW guide encourages journalists to seek out “ a goldmine of critically important and exciting news stories.”

Both organizations realize that the biggest stories coming out of China this August will have little to do with sports. Twenty-five thousand journalists were promised unprecedented access inside China. Beijing officials are more than aware that this could likely turn a $40 billion dollar publicity campaign for the Communist regime into an unprecedented disgrace.

With that in mind, it is no surprise reports have surfaced of massive arrests of dissidents and Falun Gong practitioners.

The Falun Dafa Information Centre reported that since December 2007, 8,037 practitioners have been arrested. Amnesty International also reports that the Beijing police “have used abusive detention practices such as re-education through labour to ‘clean up’ the city.”

From cyber dissidents to citizens petitioning the government over land seizure, Chinese are being swept into labour camps without so much as a show trial, all to ensure they never come into contact with foreign media.

What the CIPFG guide hits home is how hellish China’s forced labour camps really are. Whistle-blowers that have done things we would view as heroic in the West are literally being worked to death. Thirty miles from the opening ceremonies in Beijing, (which another NGO, Reporters Without Borders, hopes you’ll boycott) there are two massive labour camps a stone’s throw from each other. Both package the aforementioned chopsticks.

At Beijing Municipal Women’s Re-education Through Labour Camp, Jennifer Zeng claims she “was forced to squat motionlessly and continuously under the scorching sun” for up to 15 hours.

“I was beaten, dragged along the floor and shocked with two electric batons until I lost consciousness,” says Zeng. “From February 2001, I was forced to make 100,000 promotional toy rabbits for Nestle where 130 of us worked up to 22 hours a day to fill the order.”

Jennifer was held in the facility along with 1,000 other women, an estimated 80 per cent of whom were Falun Gong practitioners.

According to the Laogai Research Foundation, a U.S.-based research group focussed on China’s labour camp system, there were 1, 045 forced labour camps in the country as of 2006. Included in their report are details of camps holding as many as 40,000 prisoners, one of which was an adapted coal mine.

With a track record like China’s and the volume of such reports surfacing, continuing on with the Olympics this year may seem a dark and horrible farce.

Anyone who acts surprised at whatever madness happens next either lived on the moon for years, or is feigning innocence.