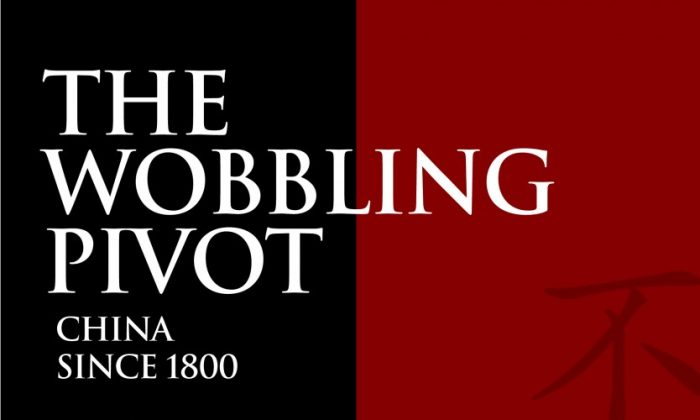 China Negotiates the Local and the Central

Anyone, upon seeing the words “China since 1800” as part of a book title, would be forgiven for wondering why the story needed to be told again. Perhaps after getting halfway through Pamela Kyle Crossley’s The Wobbling Pivot, however, the justification should be self-evident.

The book is an attempt to trace out the tensions between local control and central government—centralization and localization—in the period in question and across its rulerships.

Chapters often begin with a brief bio of some influential personage you’ve never heard of, and weave that individual’s details into the beginnings of the story—this is an attractive approach to history. Elemboo, for example, was a Manchu general who killed rebels for three decades, “a quiet man of gentle carriage” who was in battle “as fierce as he was meek in domesticity.”

Embedded in her treatment of the period one also learns historical facts from heretofore unknown perspectives. The reason the Qing Empire rejected British entreaties to trade were due not only to economic rationales, Crossley writes, but necessary to the continued stability between central government and locality. (p. 41)

A highlight is the colorfully detailed and unusually interesting retelling of the Opium Wars (Fact: It was a price war between the United States, which was just attempting to enter the market selling opium to China, and the British East India Company that drastically cheapened the price of the noxious drug and set off the eponymous and historic chain of events; pp. 70–97)

It’s not often told that when the Qianlong emperor rejected Macartney’s entreaties for a formal trade relationship (in a floridly translated letter for which the original Chinese has never been found, as Crossley usefully informs us), he was actually telling him to go to the man on the ground in Canton (Guangzhou), and sort it out with him directly: “Asking the court to strangle its own sources of cash and evaporate the thin edge of local order in the coastal communities for the purpose of correcting the trade balance of a very, very far away country was a doomed mission from the start.”

The volume mostly takes the form of a chronological history, interspersed with little essays on random subjects: water; the primacy of Hunanese intellectuals; a particular female warrior who may or may not have been the sister of Hong Xiuquan, the mad leader of the Taiping Rebellion; the spread and role of minerals in Chinese and PRC history, and so on. What differentiates it from other histories of the period may be its rich detail on unexpected nooks and unexplored crannies.

In a few of these essays, Crossley makes points of enormous significance in passing: that the CCP is considering damning the Brahmaputra River, (Yarlung Zangbo) which would deprive northern India of much of its water supply, that a “water crisis in China of a scale and severity that would be unique in the world” is in the offing.

Crossley provides unusual and supplementary details to the macro history offered by so many others.

Later chapters keep up the trend of wandering through China’s history of the 20th century, again stopping to explain to various lengths the details of some key events, like Taiwan’s subjugation by the Nationalist Party in the late 1940s, for example, or the origins of the Korean War.

It can be hard to know what Crossley’s criteria for inclusion here is. The first few years of the CCP’s establishment and domination of China are mostly depicted in positive or neutral terms: an increase in agricultural output and efficiency and a sense of stability—but the lynchings, theft of property, and thought reform campaigns are left out.

It was these years of pummeling that laid the foundation for the darker history of the Great Leap Forward that was to follow. The author covers that, her death toll of 36 million having been just superseded by Dikotter’s grim 45.

In Crossley’s explanation of the Cultural Revolution she dismisses the popular idea that Mao alone was responsible for the atrocities of the period: “Mao struck the right note and provided many of the catchphrases, but the idea that without Mao there would have been no Cultural Revolution is as historically weak as supposing that without Hitler there would have been no Holocaust or World War II.”

But the reader is left thinking that, in fact, the individual in both those cases seems precisely the catalyst for the cataclysm.

We are repeatedly taken back to the book’s main theme: centralization versus localism. The Cultural Revolution was born from the same model of radical destruction of local affiliations as the rest of the Party’s political campaigns.

“The process by which the CCP triumphed in China was one by which it worked as thoroughly as possible to transform the local societies it encountered from the ground up—using land reform to create a completely new object of loyalty among the poor farmers, killing landlords who would not cease playing the role of local magnates.”

Indeed, many of these mass murders were not necessary to redistribute the land and property, but as Mao said: “We must create a short reign of terror in all parts of the countryside. A revolution is not like a dinner party.”

To most non-Qing scholars, perhaps the chapters toward the end of the text will prove the most interesting and relevant.

It begins with a historical felicity that Crossley illuminates: Qian Xuesen, a famed Chinese scientist with achievements in rocketry, was driven from the United States in the early 1950s by anti-communist crusaders because he was Chinese. He later went on to play a pivotal role in one of the most important dynamics of modern Chinese history: the rise of qigong, and from that the rise of Falun Gong.

Qian was not directly involved in the latter, but as a powerful patron of the qigong movement he allowed it to find both an institutional space in the Party bureaucracy and a theoretical one in official discourse.

Qian’s death, along with the death of Zhang Zhenhuan, founder and director of the China Qigong Science Research Society, strengthened the hand of the more zealous and thuggish activists of applied Marxism, leading eventually to the curbing of qigong in general and later, Falun Gong in brutal particular.

Falun Gong’s quiet but staunch resistance to these attempts at curtailment (including book bannings, harassment, and denial of business licenses to known practitioners) culminated in the statewide persecution that has been sustained for over 13 years, and makes for the most compelling and important moment of recent Chinese history—its importance, in fact, only exceeded by the extent to which the many China experts still fail to understand it.

On this score Crossley is not too much different: one paragraph, which is otherwise fair but for a dash of peculiar misinformation on Falun Gong’s “sales schemes for religious paraphernalia” (there is, in fact, none).

Crossley’s final thought is a synthesis of the dynamics of rule over the period from 1800 to today. She makes clear that the New China and the Qing Empire “bear no resemblance as administrative presences,” because the Communist Party controls about the same territory but its government is 435 times the size of the Qing in terms of personnel and budget, meaning “there is more than 150 times less space between the state and the individual, with more than 150 times less space for the community to mediate.”

She does attempt to see pre-modern China and modern communist China under a unifying paradigm of the nonconsensual regime that the masses tolerate as long as it does not do too much to mess with their personal lives. This “field of political negotiation” arises because of the lack of institutions for the governed to interact with the polity.

While admiring the rich and pungent potpourri of Crossley’s work, here one needs to register a disagreement.

The CCP represents a profound break from traditional Chinese modes of governance in the way the state usurps the pre-emptive role in the organization of local communities and the sovereignty of the personal, religious, and familial lives of the people.

While the shift from local to central is a general symptom of modernity, the CCP takes the cake for the extent to which it insinuated itself in and dominated society, and the calamity and suffering that insinuation has brought (and continues to bring, one might add).