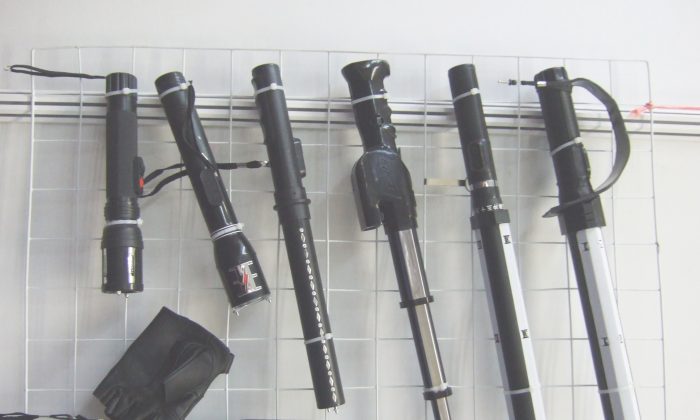 Electric shock weapons, dart guns, stun shields, thumb cuffs, restraint chairs, and spiked batons are just some of the specialty weapons designed to inflict pain being exported by Chinese companies closely aligned with, or owned by the state, according to a new report by Amnesty International.

Some of the equipment discussed in the report, such as ordinary handcuffs and restraints, a limited number of controlled stun weapons, and certain blunt striking instruments, all have legitimate law enforcement purposes, the report says.

But many of the weapons are “intrinsically cruel, inhuman and degrading, and therefore should be prohibited” from manufacture in the first place, the report says.

There are currently no comprehensive international covenants governing the manufacture and export of police weapons, and part of Amnesty’s advocacy work following the report will be to begin establishing such a mechanism—with China perhaps serving as a negative example.

The export business of these torture weapons began after the robust demand by security forces in China had been met, and companies were looking for an outlet.

“There’s an initial domestic market in China, because it appears a lot of Chinese law enforcement are equipped with restraints and electric shock batons—and that market has stimulated indigenous development with Chinese companies,” said Patrick Wilcken, the lead author of the report and a researcher on arms control and human rights at Amnesty International, in a telephone interview.

Chinese security forces are reported to regularly put to use such weapons, in prisons, pretrial detention facilities, labor camps, “black jails,” and what are colloquially known as brainwashing centers.

The report refers to the heavy use of electric batons to torture practitioners of Falun Gong, a traditional spiritual practice, in the attempt to have adherents renounce their beliefs.

Jia Yahui, for example, was tortured with electricity while in a labor camp in 2008 and 2009. “Before they tied me to the bed and began to electrocute me the three policemen had my face covered. None of them spoke while they electrocuted me. They started by electrocuting me on the most sensitive places—starting on my little finger, then moved up my arms, up to my armpit. Then they moved to my breasts.”

Her testimony, cited in the report, continued: “Then they began on my inner thighs. They sought out my nerves. I felt they had no humanity whatsoever. I felt they derived some kind of pleasure from the process.”

Yu Zhenjie, a Falun Gong practitioner from northeastern China, recounted that: “The head of my brigade, which had around 200-300 Falun Gong members—director Li—had been using the electric baton on my face—it’s a kind of torture the police call ‘bengbao popcorn,’ because your face splits open and looks like popped corn. It smelled horrible, the smell of burning skin.”

It’s a kind of torture the police call ‘bengbao popcorn,’ because your face splits open and looks like popped corn. It smelled horrible, the smell of burning skin.
— Yu Zhenjie, victim of electric baton torture

The batons used to inflict damage and torture like that are now sold at police equipment trade shows around the world, so other security forces can put them to use. Anecdotal reports indicate that the police forces of certain countries in Asia and Africa use electric torture for some individuals in custody.

Even for the legitimate weapons, Chinese authorities appear to make little effort to ensure that the instruments do not fall into the wrong hands.

Restricting the industry in a meaningful way may be difficult given the relationship between the torture equipment manufacturers and the Chinese state. Many of the primary manufacturers of the equipment are state or formerly state-owned companies. Others identify themselves as operating under the “remit of” the State Council, China’s cabinet, but the precise relationship of the companies to the Communist Party is unclear.

“We put it directly to the Chinese authorities, but they never responded,” Patrick Wilcken.

“Clearly the Chinese government is a difficult one to influence; we have found that working on a whole series of human rights issues.”

What is remarkable about China is the range of equipment at the nastier end of the spectrum that they are producing.
— Patrick Wilcken, researcher, Amnesty International

The large state-owned suppliers of equipment have extensive research and manufacturing facilities, and control hundreds of subsidiaries which actively market the torture equipment. The China Xinxing Import/Export Corporation, for example, owns 54 factories, manufacturing handcuffs, thumb cuffs, transport cuffs, restraint chairs and electric shock stun guns and batons. In 2012 the Group stated that it has links with more than 40 African countries and its trade with Africa was worth $100 million.

In 2010, the Beijing based Poly Technologies, which advertises batons, spiked shields, electric shock stun batons and various types of mechanical restraints, boasted that it was among the top 100 foreign trade companies in China, the report says.

The law enforcement equipment industry is multi-billion dollar, and global—European countries and the United States all produce a great deal of police weaponry. But the equipment emerging from China is a rather different matter. In the interview, Patrick Wilcken commented: “What is remarkable about China is the range of equipment at the nastier end of the spectrum that they are producing.”