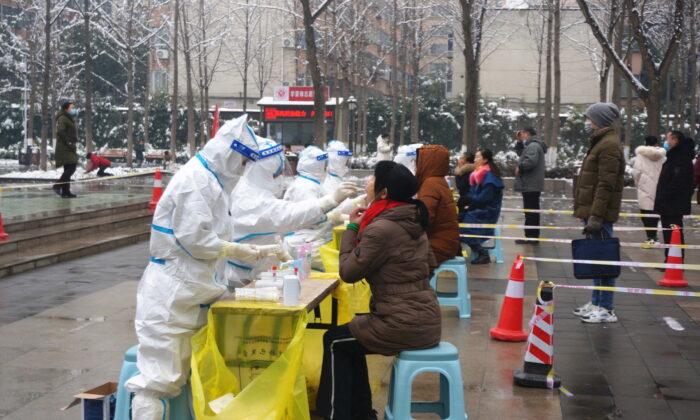 Another Chinese megacity is under lockdown due to a recent COVID-19 outbreak. Zhengzhou city, the provincial capital of China’s central Henan Province, is carrying out strict measures to contain the spread of the disease. But the lockdown could impact major manufacturers such as Apple supplier Foxconn, disrupting Apple’s supply chain.

Following Shanghai, Hangzhou, and Guangzhou, local authorities in Zhengzhou announced a week-long lockdown of the city with 10.5 million residents from May 4 to May 10.

According to official figures, around 70 cases were reported this week. However, due to Chinese authorities’ past record of underreporting infections and covering up information, it is difficult to assess the true scale of the current outbreak.

As soon as the lockdown order was announced, residents began panic buying, stocking up on food and supplies. Meanwhile, thousands of people tried to leave the city, causing severe traffic jams.

Chinese media reported on April 30 that COVID infections were first detected among employees at a railway station in Zhengzhou and then began to spread across various communities.

On May 3, the authorities issued an official notice, “Order No. 73,” requiring most residents to work from home, to extend the spring break for students, to implement traffic control measures, and to prevent residents from leaving the city unless they have special permission to do so. The authorities also announced that three rounds of city-wide mass testing would be conducted during the lockdown.

According to the notice, the city’s buses and subways would reduce services, and taxis (including ride-hailing services) would operate on alternating schedules based on “odd and even” numbers of their license plates. Before boarding public transportation, passengers must have their health code scanned, body temperature checked, and wear masks. In addition, they also need to show proof of a negative nucleic acid test taken within 24 hours. The airport will continue to implement existing pandemic prevention and control measures.

The authorities also tightened control of people entering and leaving Zhengzhou, requiring all residents to remain in the city unless they get special permission to leave. People are not allowed to enter the city unless deemed necessary by authorities.

Authorities advised residents not to hoard supplies and not to panic. But after witnessing what happened to people in Shanghai after the lockdown, residents rushed to the stores to stock up on food and supplies.

Early last month, nearly 25 million residents in Shanghai were locked down, triggering a humanitarian crisis. Various media reported that people suffered from starvation and no access to medical care, and many committed suicide.

On May 3, a Zhengzhou resident surnamed Li told The Epoch Times: “This afternoon, everyone in Zhengzhou is rushing to stores to hoard food and supplies. Goods in many supermarkets have been sold out very quickly. The city is about to be shut down tomorrow. I will definitely go out to buy some [supplies]. I am afraid that Zhengzhou will become the next Shanghai. Almost all supermarkets sold out of supplies.”

The Epoch Times obtained a video shot by residents showing traffic jams and crowded supermarkets in Zhengzhou. Many people were rushing to buy food and supplies, and thousands tried to leave the city before the lockdown.

Taiwan electronics manufacturer Foxconn, a major Apple supplier, has a production base in Zhengzhou. The company said that its production in the industrial park will continue in a closed environment during the lockdown, causing manpower and supply shortages. However, authorities expect production to take a hit, and Apple’s supply chain could be affected.

Several Zhengzhou Foxconn recruitment staff posted on social media platforms that due to the lockdown, the company has suspended the recruitment of workers since May 4. At the same time, previous recruits cannot enter the factory to start working.

Taiwan’s Minister of Economic Affairs Wang Mei-hua told the media on May 4 that the lockdown has an impact on Taiwanese business operations in mainland China. Wang said that the Chinese regime’s ongoing pandemic control measures will affect the supply chain and raw materials of production.