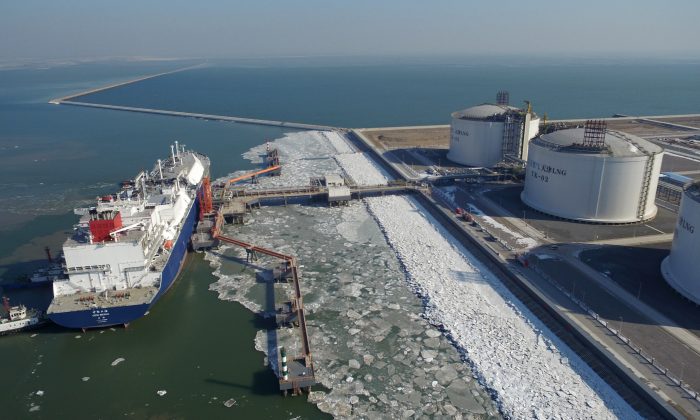 A new liquified natural gas (LNG) terminal in the northern city of Tianjin, China, on Feb. 6, 2018. LNG exploration is among a list of sectors for which Beijing has announced it will ease foreign investment restrictions. (VCG via Getty Images)
US-China Relations

About a week before U.S. tariffs on a list of Chinese goods worth $34 billion became effective on July 6, the Chinese authorities announced that it would ease restrictions on foreign investments in certain industries.

On June 28, China’s National Development and Reform Commission released a revised list of sectors in which foreign investment is limited or prohibited, reducing the number of targeted sectors from last year’s 63 to 48.

Some areas, such as the production of nuclear fuel and radioactive minerals, were previously banned and now have exclusions lifted.

Other fields, such as airplane design, manufacturing, and repair, now no longer require foreign investors to create joint ventures with local companies.

For the management and construction of electrical networks, a rule requiring the Chinese partner to own controlling shares was overturned.

Some observers see the timing as particularly convenient, given the trade dispute between China and the United States. The easing of restrictions could be seen as trying to defuse tensions with the United States—especially since during trade negotiations, U.S. officials had repeatedly sought to convince the Chinese regime to open up its markets and stop pressuring foreign firms to transfer technology to their joint-venture counterparts.

In an interview with New Tang Dynasty Television, a New York-based broadcaster and sister media of  The Epoch Times, Chinese financial analyst Ren Zhongdao said the Chinese regime’s announcement was to “delay or alleviate the [trade] crisis” before the trade tariffs set in.

Some of the eased restrictions are in fields where China has previously promised to buy more U.S. imports as a compromise with U.S. trade officials, who sought to lower the trade deficit.

For example, the new rules say foreign investors will no longer have to conduct oil and natural gas exploration and development through joint ventures. China has said it would buy more liquefied natural gas from the United States to feed its demand for clean energy.

Previous limits on foreign investments in the fields of breeding new crop varieties and seed production for wheat and corn will also be relaxed. China has promised to import more U.S. agricultural products. But it has also threatened to retaliate with tariffs on U.S. soybeans, corn, wheat, cotton, sorghum, and more, once the U.S. tariffs go into effect.

Beijing had done something similar back in May, pledging to cut tariffs on foreign imported cars as President Donald Trump complained about China’s high auto tariffs. Trump illustrated the trade imbalance by comparing how Chinese imported cars are only charged a 2.5 percent duty, compared to the 25 percent tariffs slapped on American cars exported to China.

Others, such as Gong Shengli, a researcher at a Chinese financial think tank, believe China is trying to attract more foreign capital at a time when its economy is suffering a slowdown. As he told New Tang Dynasty Television in an interview: “Since 2005, China’s foreign investment has significantly dropped.”