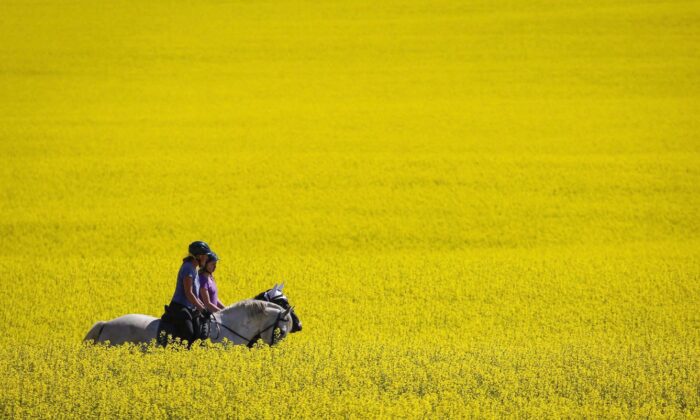 Riders and their horses pass through a canola field as they take an afternoon trail ride near Cremona, Alta., July 19, 2016. (The Canadian Press/Jeff McIntosh)
Canada

A three-year Chinese ban on Canadian canola has come to an end, according to the federal government.

“We welcome this decision to remove the restrictions and immediately reinstate the two companies to allow them to export Canadian canola seeds,” the statement said.

“Canada will always firmly uphold the international rules-based trade system and related dispute settlement mechanisms, as well as a science-based approach to resolving such issues.”

In March 2019, the Chinese government blocked canola shipments from Canadian companies Richardson International Ltd. and Viterra Inc. by suspending their licences, alleging the detection of pests in canola shipments.

In September of 2019, Canada took the canola dispute to the World Trade Organization. A WTO dispute resolution panel was composed in November 2021.

Before the trade tensions, the Chinese market made up 40 percent of Canada’s canola exports.

The industry organization estimates the dispute cost the industry between $1.54 billion and $2.35 billion from lost sales and lower prices between March 2019 and August 2020 alone.

“This is a positive step forward, restoring full trade in canola with China and ensuring that all Canadian exporters are treated equally by the Chinese administration,” said Jim Everson, Canola Council of Canada president, in a news release.

“We will continue efforts to nurture and maintain a predictable, rules-based trade environment.”

Canada is the world’s largest producer of canola. It is one of the most widely grown crops in Canada, and is currently trading at all-time record highs as the war in Ukraine drives up prices for agricultural commodities.

Canola is primarily used to make cooking oil, but can also be used as livestock feed and to make biodiesel.