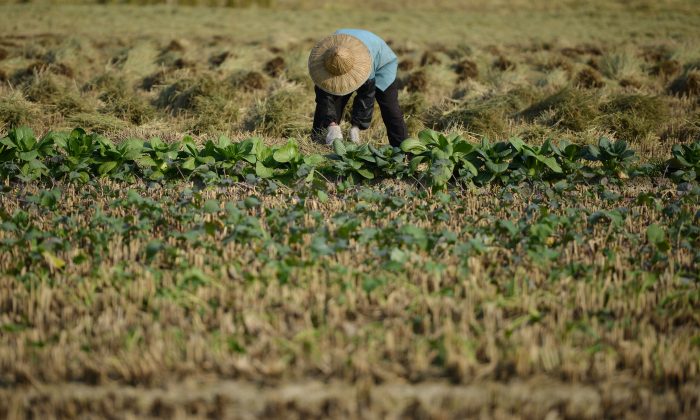 A farmer harvests a crop in the village of Gangzhong in China's eastern Zhejiang Province on Nov. 19, 2013. China suffers from severe economic inequality, with 468 million people spending less than US$2 per day. (Peter Parks/AFP/Getty Images)
Chinese Regime in Crisis

China’s expert commentary says that these estimates are “not even close,” and the media thus released special reports that “Although China’s economy has been called ‘No.1,’ China’s GDP per capita is 50 years behind (US’s GDP per capita)”. The Chinese reports said they were “rectifying misunderstandings.”

China refused the title of “No.1” because it knows itself clearly.

On April 30, the World Bank released a report predicting China would become the No. 1 economic power in the world. However, China also declined to accept this title of No. 1.

Bejing’s refusal to accept the title of No. 1 shows its knowledge of the endless counterfeits in the country’s statistical data.

In reality, the GDP calculation is not equivalent to economic strength; 1) Although the total GDP is high, GDP per capita is low. 2) The disparity between rich and poor is excessively great, which causes a polarization of household consumption patterns and negatively affects domestic demand, a principal force in stimulating a country’s economic development. 3) Natural resources are the primary foundation in supporting a country’s sustainable development, but China must overly rely on outside sources.

In 2013, a total of 16 countries had a GDP surpassing US$1 trillion. The United States had a GDP of $16.19 trillion, making it first in the world. China had over 9 trillion, placing it in second and significantly surpassing Japan’s third place GDP of $5.99 trillion.

As overall GDP cannot prove China’s economic power, GDP per capita also cannot prove the standard income of a great majority of Chinese people because China’s wealth is too concentrated in a select few.

In July of this year, Peking University’s Institute of Social Science Survey issued the “2014 Report on the Development of People’s Livelihood in China.” The report indicated that in 2012, the Gini coefficient (a measure of statistical dispersion in which zero represents absolute equality and one represents absolute inequality) of Chinese households’ net assets reached 0.73.

Another set of data confirms the reality that China’s wealth is overly concentrated. The “Wealth-X and UBS Billionaire Census 2014” reported that there are 152 individuals in China with net assets surpassing US$1 billion, second only to the United States.

But the reality is cruel: This one extremity consists of the billionaires ranking 2nd in the world, while at the other extremity are the 200 million impoverished individuals who spend an average of US$1 per day and 468 million people in China who spend less than US$2 per day.

The Peking University report divides Chinese consumption patterns into five categories: the poor and sick type, the ant type, the snail type, the stable and secure type, and the pleasure-seeking type.

From the distribution in China, we can see that one end of Chinese families, which suppresses consumption (the ant type) or has heavy monetary burdens from medical treatment, education, and housing (the snail type, the poor and sick type), occupies the great majority.

On the other hand, there are a few households living in abundance (the pleasure-seeking type). The city and countryside have a huge discrepancy in consumption levels: the rural areas have a majority of households of the poor and sick type, in contrast to cities and towns with more of the pleasure-seeking or safe and secure type.

Since a long time ago, economic growth in China has relied on the “troika” of foreign trade, investments, and domestic demand.

At the present stage, China is in the process of losing its status as the world factory. Foreign trade is suffering severely, and although it warms up again every now and then, the long-term trend is a decline.

Investments stem from three areas: the government (including to government-owned businesses), the private sector, and foreign sources. Government investment is slowing and foreign businessmen are similarly decreasing investments towards China.

Of the “troika,” only the wheel of domestic demand remains. The inadequacy of China’s consumption rates has been a long-term problem. According to official statistics, in the past few years, household consumption expenditures only made up 48 percent of China’s GDP, which is not only far lower than the world’s average of 80 percent, but also lower than China’s level 20 years ago of 60 percent.

In 2013, China’s researchers suggested that China’s consumption rate is underestimated because the numbers do not include housing consumption, a significant sum of money which includes rent and home maintenance, and gas, electricity, and water bills. This theory makes sense.

But regardless of whether housing fees are included in the consumption rates, it is still difficult to alter the reality that China’s household consumption patterns are highly polarized, and those additional expenses do not boost domestic demand.

Any market that only relies on the government and the wealthy for support definitely cannot flourish. For example, China’s real estate market completely depends on the support of these two sectors and is entirely separated from the true spending abilities and demands of the Chinese people, ultimately creating a major economic bubble.

A country’s production and distribution is like a car’s front and rear wheels. Production determines the amount of supplies, and distribution decides the extent of demand. To have a greater supply than demand can be compared to a car with only its front wheel turning that thus cannot travel properly.

In a similar fashion, in a society with serious distribution disparities, various kinds of intense conflicts and abnormalities will appear. Even if it enjoys short-term economic prosperity, it will be difficult to preserve.

China’s government continues promoting the idea of “three self-confidences”: in China’s political system, in the Party line, and in the Party theory. But in regards to the deficiency in natural resources, the government is relatively clear-headed and understands its own situation.

China’s government now admits the ecological crisis and the solid trend of worsening pollution in the water, land, and air. For example, 349 million mu (approximately 57.5 million acres), which takes up 19.4 percent of China’s total arable land, have been severely polluted.

Lack of water resources has similarly posed a critical problem because the amount of water available is insufficient and contamination of the water is also severe. In addition, air pollution, according to the 2010 Global Burden of Disease Study, has caused the premature deaths of 1.2 million, almost 40 percent of the world’s total.

China’s government certainly knows these facts: China’s self-reliance in food production has fallen to a rate of 86 percent, with China importing large amounts of rice, wheat, and corn. China relies on imports for a large part of its energy and minerals and depends on foreign technologies at a rate of at least 50 percent (the United States and Japan’s dependency on outside technology is at a rate of merely 5 percent).

Using oil, the so-called “blood of the modern economy,” as an example, China depends on imports for nearly 65 percent of its petroleum, which mainly comes from the Middle East, Latin America, Africa, Russia, and other areas.

The Middle East and Africa are both classified as highly unstable regions politically. This means that China’s acquirement of energy could be easily influenced by political changes.

In the past decade, China has made purchasing stocks and purchasing company operations an important strategy in overseas investments. Currently, many such investments have been wasted due to changes in the political situation.

For example, China invested over US$20 billion in Libya, but these all became useless due to the 2011 Arab Spring. China also invested large amounts in Sudan, but due to fierce political clashes there, it had to dispatch an army of 700 troops to protect overseas assets.

In the greater half of the past century, the United States provided public safety for the international order, while China and the majority of the rest of the world all hitched a ride as beneficiaries. In the future, as U.S. foreign policy changes, perhaps China will have to rely more on itself to protect its overseas investments.

Precisely because Beijing understands that the just-crowned world’s number one economic power is actually only a “gilded exterior, but shabby and ruined on the inside,” China feels dissatisfied in its misleading No.1 title.

But after investigating how the title came to be, China cannot blame the World Bank and the IMF, because the watered down data was provided by China’s National Bureau of Statistics (NBS). For the Chinese government, rather than complaining about their “No.1” status, it would be better to change their own bad habit of falsifying statistical data.

First published on Voice of America.

He Qinglian is a prominent Chinese author and economist. Currently based in the U.S., she authored “China’s Pitfalls,” which concerns corruption in China’s economic reform of the 1990s, and “The Fog of Censorship: Media Control in China,” which addresses the manipulation and restriction of the press.