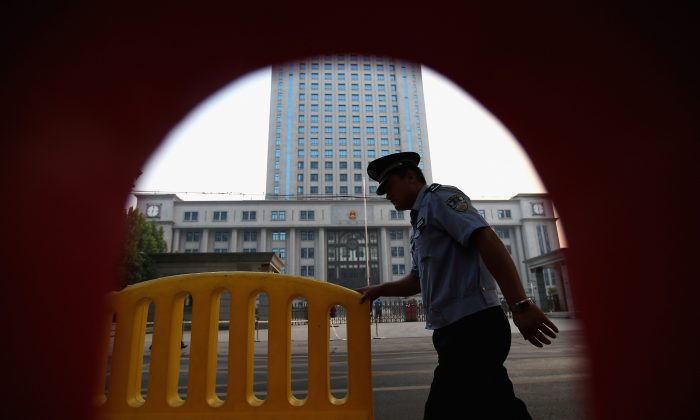 China Investigates 12 Judicial Officers in a Month. They Share One Crime in Common.

The Chinese Communist Party has embarked on an anti-corruption sweep of its judicial system.

From mid-April to mid-May, the Party has announced internal investigations into 12 court presidents and procurator-generals—who head local prosecutor’s offices—across China.

Since current Party leader Xi Jinping took power in 2012, he has launched an anti-corruption campaign to weed out misbehaving officials, who were often Party members loyal to former leader Jiang Zemin. They form an opposition faction to Xi and his allies. Scores of officials have been purged.

The 12 judges and prosecutors in the current sweep all had one commonality: they participated in the persecution of the Chinese spiritual practice, Falun Gong, launched by Jiang in 1999. When Jiang was in power, many officials showed their political allegiance to him by carrying out the persecution.

According to records kept by Minghui.org, a U.S.-based website dedicated to reporting on the persecution of Falun Gong in China, the six court presidents and six procurator-generals recently named in investigations have all either sentenced or prosecuted Falun Gong practitioners solely for their spiritual beliefs.

Falun Gong, also known as Falun Dafa, is a meditation practice based on the moral principles of truthfulness, compassion, and tolerance. It became hugely popular in China during the 1990s—with official estimates of 70-100 million adherents by 1999. However, Jiang perceived Falun Gong’s popularity as a threat to Communist rule and thus ordered a nationwide persecution of the group, mobilizing the state’s security apparatus to arrest, detain, and sentence millions to prison, forced labor camps, and brainwashing centers.

Wang Chen, who served as court president of Wuhan City Intermediate Court in Hubei Province for over 7 years, sentenced at least 82 Falun Gong practitioners to prison, according to Minghui.org’s records. Among them, Cui Hai, a practitioner imprisoned at Wuhan Women’s Prison, died just 19 days into her sentence, likely due to torture.

In September 2015, Laizhou Falun Gong practitioner Cui Lili visited the local detention center to bring clothes to her husband, also a Falun Gong adherent, who was detained there. Cui was abducted on the scene and brought to a local brainwashing center, where adherents undergo psychological torture in an effort to force them into giving up their beliefs. In November, Cui was formally arrested and sentenced to 7.5 years in prison.

Minghui.org also documented another case in February 2016. Sun Shouyu, a Falun Gong practitioner, was tried at court. Sun’s lawyer presented arguments for a not guilty plea, as freedom of belief is guaranteed under China’s constitution. The court did not issue a sentence that day. But later, the court secretly sentenced Sun to 3.5 years imprisonment.

The other judicial officials under investigation who participated in the persecution of Falun Gong come from cities around the country, from Liaoning in the north to Sichuan in China’s west.

In March, the Party announced structural reforms that would significantly weaken the 610 Office, leading many observers to believe the Party would likewise back down from the persecution of Falun Gong practitioners.