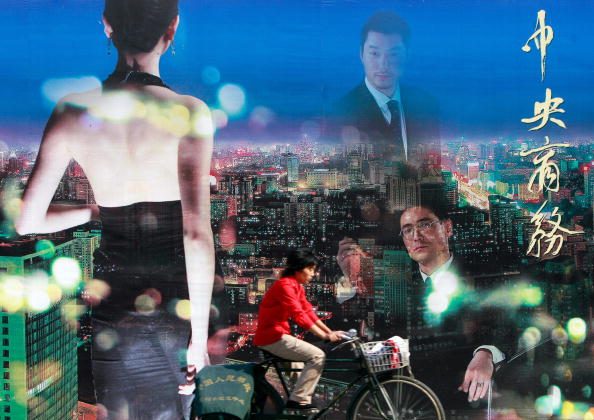 A cyclist rides past an advertisement billboard at the city's central business district of Beijing on Sept.5, 2007. (TEH ENG KOON/AFP/Getty Images)
Chinese Regime

China Has the World’s Highest Rates of Infidelity

A recent report published by a Chinese professor has revealed that China had the greatest proportion of people engaged in extramarital affairs.

Pan Suiming, a professor at Renmin University, conducted a nationwide survey for nearly two decades. Since 2000, Pan took random samples from around the country every five years.

The data does not include people who would not admit to having affairs.

Why is Chinese people’s morality declining so rapidly?

A May 2016 report in the Hong Kong-based newspaper Oriental Daily News sought to explain the phenomenon, noting that Chinese regime officials from the lowest-ranking to the top leadership had mistresses, setting a bad example for the rest of society.

According to a biography of the former Chinese Communist Party leader, Jiang Zemin, written by staff at the Chinese edition of The Epoch Times, “The Person Jiang Zemin,” Jiang was known to have several mistresses, including singer Song Zuying, TV anchor Li Ruiying, former education minister Chen Zhili, and senior official Huang Liman.

Under Jiang’s leadership, his trusted confidants and staff in all departments of the Chinese military indulged in adultery.

Taiwanese newspaper Liberty Times noted in a November 2, 2015 report that 95 percent of purged CCP officials had mistresses. Many officials squandered their illicit money on their mistresses. For example, former director of the Jiangsu Province Construction Department, Xu Qiyao, had 146 mistresses, including with a mother and daughter. Former secretary of the Party committee at Nanchang Aviation University, Wang Yanyan, took bribes to help his mistress open a hotel, and later gave another mistress shares to a coffee shop worth 380,000 yuan ($59,993).

Citing the aforementioned Renmin University report, Liberty Times recently reported that among officials arrested for corruption in 2012, 95 percent had extramarital affairs, 60 percent of whom were sacked because they had mistresses.