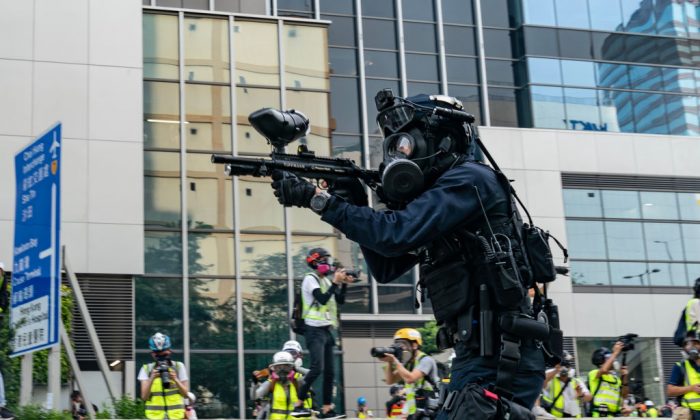 The announcement was made in an online report from the academy’s Technical Institute of Physics and Chemistry (TIPC) on Sept. 18.

The specific name of the research project was “portable low frequency high decibel focused acoustic device in crowd dispersion for police use.”

It is one of the top ten national key R&D programs launched in November 2016, according to the report.

The instrument, jointly developed with research teams from the Chinese military and Ministry of Public Security, passed third-party testing and field testing on Sept. 4. The development was verified as “an independent innovation,” the TIPC reported.

However, the entire report was later removed from TIPC’s website.

Sonic weapons use sound waves to injure, incapacitate, or kill an opponent. There are two major categories of sonic weapons: those that involve audible frequencies and those that are either ultrasonic or infrasonic and are inaudible to humans.

TIPC’s project name suggests that the sound generated by this portable weapon is likely infrasound (low frequency). According to a Sept. 25 article from Popular Mechanics, infrasound’s effects on the human inner ear include, “vertigo, imbalance, intolerable sensations, incapacitation, disorientation, nausea, vomiting, bowel spasm; and resonances in inner organs, such as the heart.”

Traditional infrasonic weapons are typically bulky units, and are most commonly used for crowd control and repelling pirates.

Previously, China claimed to have developed a laser gun that burns flesh from half a mile away.

In an Aug. 2018 article, Phoenix News, a Hong Kong-based pro-Beijing publication, described this star-wars like laser rifle, ZKZM-500, as a powerful weapon that can instantly cause serious flesh burns and set flammable fabrics on fire, inflicting pain “beyond human endurance.” The laser beams can even penetrate windows to attack the target.

Despite the horrific damaging effects, the Phoenix article emphasized repeatedly that this laser gun is a non-lethal weapon and will first of all be used as riot gear for China’s armed police.

In addition, China does not plan to export this powerful laser gun. The only users will be the Chinese military and law enforcers, the article said.

Zheng Haochang, a U.S.-based commentator on current affairs, told the Chinese-language Epoch Times that high-tech riot weapons have always been used by Western countries to combat terrorists, but in China, the regime’s main focus is quelling dissidents.

“Especially at the present time, the Chinese Communist Party (CCP) feels very insecure about its power, and the suppression of dissidents has continued to escalate over the years.”

In addition, the damaging effects of sonic weapons are not readily visible. “From this perspective, a portable sonic gun can cause extensive damage without leaving any traces. The victims will have difficulty proving the injuries they suffered. Chinese civilians are at a bigger risk when the CCP deploys this type of weapon to quell dissidents,” Zheng added.

Li Da, an automation engineer working in the United States, told the Chinese-language Epoch Times that the CCP has been trying to control China’s 1.4 billion Chinese people by developing high-tech weapons, police equipment, and surveillance technology on a large scale in recent years.

As far as he knows, the CCP also uses biological weapons that destroy liver cells and eventually kill pro-democracy activists. “The CCP is already a modern Nazi organization equipped with high-tech,” Li said.