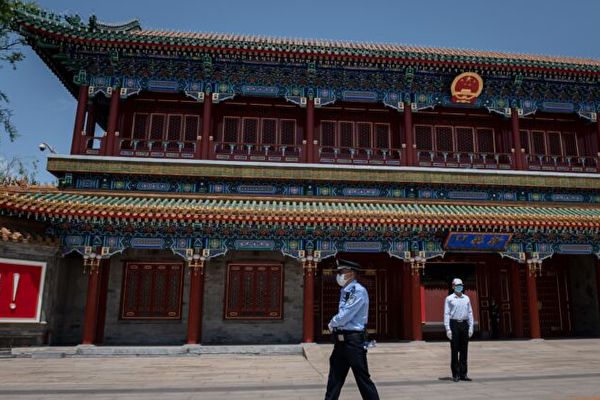 A security guard (R) and a police officer (L) secure the area at the entrance to the Zhongnanhai leadership compound in Beijing, China, on May 18, 2020. (Nicolas Asfouri/AFP via Getty Images)
Thinking About China

The Chinese regime has taken it as a pro forma exercise to yell loudly about how failure to cooperate with it creates “safe havens” for criminals in whatever country refuses to sign an extradition treaty or otherwise fails to cooperate with China in “law enforcement.”

Based on how successful Beijing has been in pursuing such cooperation and agreements, it is seemingly a strong argument for it, with few Western politicians wanting to appear “soft on crime.”

With that in mind, China’s retaliation against the United States for Speaker of the House Nancy Pelosi’s visit to Taiwan is incredibly interesting. Beyond expanded military drills around Taiwan, the main response has been the suspension or termination of cooperation in eight areas. Of those, three issues concern law enforcement cooperation. Cooperation with the United States was limited to start with. Still, the suspension of these three areas of cooperation—repatriation of illegal immigrants, legal assistance in criminal matters, and cooperation against transnational crimes—is at a standstill. Furthermore, cooperation against the narcotics trade was also suspended.

Yet, digging a bit deeper, it shows that China’s loud cries of how lack of cooperation was creating “safe havens” turn out—perhaps not surprisingly—to have been a case of crying wolf all along.

In fact, the United States has engaged China extensively for a decade to expand cooperation on the repatriation of illegal immigrants—with little success. The United States has some 39,000 illegal immigrants that are supposed to be sent back to China, its so-called “removal inventory.” To do so, these people need to be issued travel documents by China so that they can be sent back—yet that rarely happens.

Instead, China has refused or been intentionally slow in doing so, using it as leverage. In 2015, in preparation for the meeting between then-President Barack Obama and Chinese leader Xi Jinping in Washington, talks were in full swing. Beijing even signed a memorandum of understanding on it, knowing it could just ignore the document whenever it wanted (and it did). In the end, the only way China would cooperate would be if the United States also sent back a list of 200 people wanted by China. Some 200 political targets needed to be brought back to China and imprisoned if Beijing were to cooperate on illegal immigration. This had nothing to do with cooperation on illegal immigration and mattered little to China, as such cooperation was merely a bargaining chip.

Luckily, in this case, the United States rightfully refused. Instead, what happened was that, despite the Obama-Xi meeting at the White House, Beijing secretly sent agents to the United States to get those 200 wanted people back to China. But the plan was exposed by the FBI.

It turns out law enforcement cooperation to solve a real problem—in this case, illegal immigrants and the crime that comes with such illegality—wasn’t an issue of any interest, and China, by refusing to cooperate, was, in fact, creating a “safe haven,” including for nearly 1,000 violent offenders. Perhaps to no one’s surprise, China’s yelling about “safe havens” wasn’t so much about the principle as it was to secure a specific goal—to gain something to its advantage, no matter the consequences.

With a partner like that, good riddance to the “cooperation” on illegal immigration and beyond.