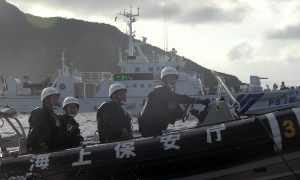 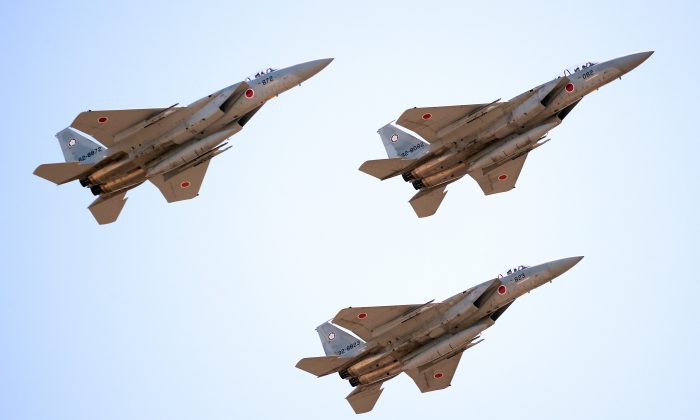 In a move a Japanese diplomat termed “very dangerous,” China has raised the stakes with Japan in its dispute over the Senkaku Islands. On Nov. 23 the Chinese Defense Ministry announced on its website an Air Defense Identification Zone (ADIZ) in the East China Sea, which includes the disputed islands.

The ADIZ will require all aircraft entering the zone to notify Chinese authorities, and China may take “emergency military measures” if they do not obey. The islands, called Daioyu by China, are claimed by Japan, mainland China, and Taiwan.

Chinese Defense Ministry spokesman Geng Yansheng responded soon after, saying if Japan shot down one of its UAVs, it would be an act of war, “and China will take resolute measures to strike back.”

Japan, Taiwan, and the United States all responded swiftly to the Chinese announcement.

In a statement U.S. Secretary of Defense Chuck Hagel reaffirmed the U.S.–Japan Mutual Defense Treaty, noting that its agreement to defend Japan “applies to the Senkaku Islands.”

“We view this development as a destabilizing attempt to alter the status quo in the region,” he said, adding “This announcement by the People’s Republic of China will not in any way change how the United States conducts military operations in the region.”

Secretary of State John Kerry said in a statement the United States has “urged China to exercise caution and restraint, and we are consulting with Japan and other affected parties, throughout the region.”

Taiwan’s government immediately called a meeting of its National Security Council, which issued a statement reaffirming its claim to the islands, according to the Central News Agency.

Japan has owned the Senkaku Islands since 1895. They came under U.S. control following World War II, but were returned to Japan in 1972 along with Okinawa and the Ryukyu Island chain, which includes the disputed islands. The Senkaku Islands later came under private ownership, and Japan purchased them in April 2012.

A map of the ADIZ was released by the Chinese Defense Ministry and published by the state-run Xinhua news agency. It includes most of the East China Sea, and stretches from South Korea, to Japan, down to Okinawa, then just above Taiwan. A pointed tip at the bottom snatches up the Senkaku Islands.

Junichi Ihara, Japan’s head of the Foreign Ministry’s Asian and Oceanian Affairs Bureau, called the Chinese Embassy soon after China’s announcement, according to The Japan Times.

He told Han Zhiqiang, a minister at the Chinese Embassy, that Japan will “never accept the zone set up by China,” and said China’s move was “very dangerous.”

Japanese Vice Foreign Minister Akitaka Saiki is planning to summon Cheng Yonghua, China’s ambassador to Japan, to relay Japan’s position on the ADIZ, according to The Japan Times. The United States is also involved in discussions. John Kerry said the United States is consulting with Japan “and other affected parties” on the issue.