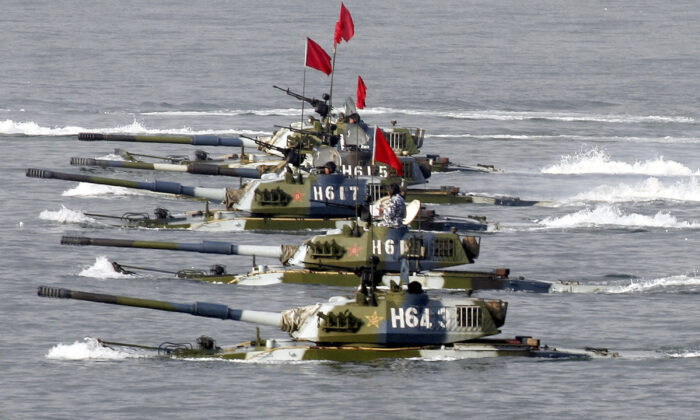 Amphibious tanks of the Chinese People's Liberation Army move to land on a beach during the second phase of the Sino-Russian joint military exercise near Qingdao of Shandong Peninsular, China, on August 22, 2005. (Getty Images)
Taiwan

China Could Use Civilian Vessels to Sustain Invasion of Taiwan: Expert

The Chinese Communist Party (CCP) could use civilian vessels to sustain an invasion of Taiwan and subsequent war, according to one expert.

The military wing of the CCP, the People’s Liberation Army (PLA), is sometimes assumed to lack the outright amphibious capability required to logistically sustain an invasion and occupation of Taiwan. And there is some ambiguity as to what extent China’s military is developing its amphibious capabilities.

“A lot of the examinations of PLA capabilities with regard to a Taiwan invasion center around the lack of ability to move those forces across [the Strait],” said Lonnie Henley, a lecturer at George Washington University.

“We still cannot answer the question of can the PLA really get its forces across, and if it gets them across, can it sustain them in combat on the island?”

Henley delivered the remarks during a discussion on the comparative logistics of the Chinese and Russian armed forces at the Center for Strategic and International Studies, a Washington-based think tank.

Critiques of the PLA’s “apparently inadequate” amphibious capabilities could be overblown, Henley said, as they don’t account for the possibility that the CCP would augment PLA forces with civilian ships and infrastructure.

Henley, who previously worked at the Defense Intelligence Agency on issues concerning East Asia, said that the PLA is unlikely to attempt a U.S.-style landing in Taiwan, and would more likely use heavy lift capabilities to drop an initial invasion force on the island before solidifying and supplying that force using civilian vessels.

By raising civilian assets to augment the PLA, Henley said, the CCP could drastically increase its capacity for sustainment in an invasion scenario. Still, Henley said, it’s difficult to ascertain exactly what the CCP’s plans for a protracted fight over Taiwan might look like.

The PLA does not have a solidified way of fighting, he said, due to the fact that it has not fought a war since 1979. Thus, while PLA officers have written plenty of reports on the hypotheticals of battling with the United States for the future of Taiwan, the force does not have the experience of dealing with adversaries in combat to be sure of how to respond best.

Moreover, while civilian assets could help the PLA sustain its forces in Taiwan during a potential conflict, Henley said there’s little evidence the CCP has plans for contending with the global economic fallout that would likely follow such an invasion.

“How resilient is China itself to that kind of cutoff?”

Ultimately, Henley said, Western experts don’t have the answers to that question or those regarding the CCP’s strategy for supplying its military in a protracted conflict.

“We’re not where we need to be in this yet,” Henley said.

“We can’t answer any of these questions.”