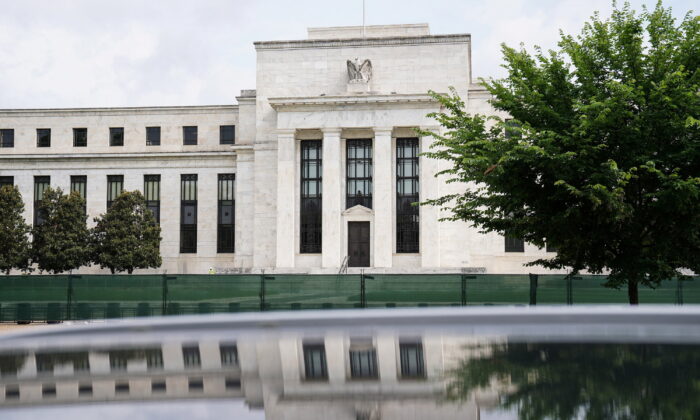 The Federal Reserve Board building in Washington, D.C., on June 14, 2022. (Sarah Silbiger/Reuters)
Thinking About China

Beijing is paying Fed officials for information and influence

A new congressional report (pdf) reveals that U.S. economic officials have pursued money and positions from China as part of programs that sought “malicious, undisclosed, and illegal transfers of information that seek to undermine the United States.”

The 40-page Senate report, based in part on an internal investigation by the U.S. Federal Reserve System, shows that Beijing has sought for more than a decade to develop a spy network, steal confidential economic information, and “gain influence” within the Fed.

The Fed Did Nothing

The FBI provided the Fed with a list of necessary counterintelligence measures, but rather than take them seriously, Fed Chairman Jerome Powell second-guessed and cherry-picked the FBI recommendations, according to the report. The Fed itself has demonstrated incompetence by losing some of the materials upon which the investigation was based.

Powell didn’t respond to a request for comment by press time.

According to the Senate report, a Fed economist was detained four times during a 2019 visit to China. Chinese officials forced him into a hotel room in a “frightening” manner, accused him of crimes against China, threatened to imprison him and harm his family, and told him they had monitored his phone for information, including information about his divorce, he said. They wanted him to “say good things about China” in the United States, provide confidential economic information, and ensure his silence about the relationship.

Since 2013, Chinese “talent recruitment programs” have sought inside information on the Fed’s view of the economy and its upcoming policy changes, including tariffs and interest rates, according to the report. In exchange, senior staff within the Fed were offered as much as 1 million yuan (approximately $150,000 by today’s exchange rate), free travel, distinctions, and research expenses to be “experts,” coauthors, and professors at Chinese research institutes and universities.

The Spies Must Go

One 2010 communication from China’s talent program to a U.S. professor and Fed economist discussed the need for “high-level Chinese economists” for “part-time service in China [that] pays a high salary.” The Fed economist applied to China’s Thousand Talents Program, obtained a position at a Chinese university, and collaborated in research with the People’s Bank of China, including the sharing of Fed computer code used for economic prediction.

The report states that another Federal Reserve employee was removed from their position “in large part due to their assistance in attempting to access restricted information at a Federal Reserve bank for a Chinese media outlet (China Global Television Network) designated by the U.S. as a foreign agent.”

The report reproduces a letter from another employee, who was incentivized with a possible $150,000 payment. He gave confidential information on the private views of a Fed chairman about rate hikes, which are the most consequential of Fed actions.

Shanghai’s Fudan University offered another Fed economist a three-year contract, starting in 2018, for an annual salary and research funds of approximately $45,000 (in Chinese yuan), to spend just four weeks annually on a campus in China and host Chinese faculty and students at the Fed in the United States. Bonuses of up to $15,000 per article would be paid for coauthoring with the institution’s regular faculty. This salary was presumably paid on top of the official’s full-time salary at the Fed.

These examples are all part of Beijing’s broader campaign to build a “P-Network,” as the investigation called it, of informants within the Fed who would answer to Beijing. Despite numerous instances of inappropriate disclosures and collaborations with the regime in Beijing, all but one of the 13 individuals retain access to confidential Fed information, according to the report.

Sen. Rob Portman (R-Ohio) is leading the campaign to make the Fed clean up its act and has already been successful in getting the bank to ban payments to its officials from foreign countries such as China.

The Fed was founded in 1913, so this measure is more than a century late.

And much more must be done. Officials who have—at any time—taken money from China, Russia, or any other adversarial nations should be removed for their serious lack of judgment.

Similar steps should be taken by not only other federal and state agencies in the United States but in our most important businesses and academic institutions.

The current Democrat-controlled House stripped the SAIA from upcoming legislation.

It should be reintroduced and passed immediately, or Beijing’s future IP theft will be the fault of Democrats in addition to the CCP.

The United States is bleeding out. Congress must take action now.