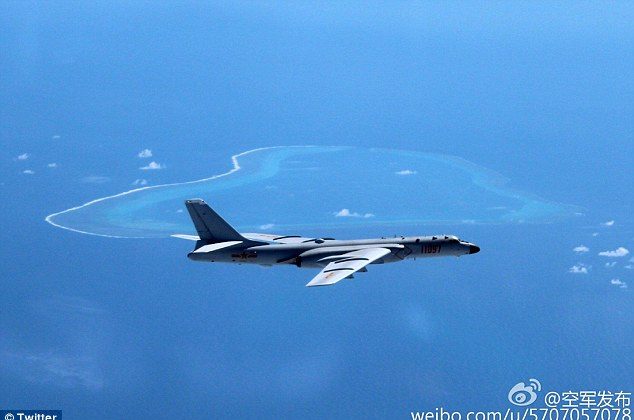 China Closes Off Part of Disputed Sea for War Games

Chinese authorities have declared a no-sail zone in a section of the disputed South China Sea on July 18, just days after an international tribunal ruled that China’s claim over nearly the entire sea is illegitimate.

A statement published on the website of China’s maritime administration announced the closure of an area off the coast of Hainan Island, southern China, to host a military exercise. No details of the war game have been released, but Chinese forces regularly hold live fire drills in the area.

On July 18, the Chinese air force posted photos on social media sites of a jet bomber soaring above the Scarborough Shoal (more recently christened Huangyan Island by the Chinese). The pictured H-6K aircraft is an upgraded version of a 1950s-era Soviet design. Its weapons include nuclear bombs and supersonic anti-ship missiles.

Chinese air force spokesman Shen Jinke told the state-run Xinhua news agency that the bomber was accompanied by fighters as well as reconnaissance and refuelling aircraft to patrol the reefs and islands of the disputed region.

“The air force will continue to conduct combat patrols on a regular basis in the South China Sea,” he said.

Six states claim overlapping parts of the South China Sea, but China’s are by far the largest and most adamantly-contested. On July 12, a three-year international arbitration introduced by the Philippines ruled that the Chinese claims were groundless and that its extensive presence is in violation of Philippine sovereignty.

China denied the legitimacy of the court, and dismissed the July 12 ruling as a “piece of waste paper,” despite being a signatory to the United Nations convention it serves. Chinese officials have repeatedly criticized the Philippines and the international community for opposing its claims.

On July 19, senior Chinese admiral Wu Shengli warned that freedom of navigation patrols in the South China Sea by foreign navies could end “in disaster.”

This year, Chinese fighter jets and ships have confronted American warships on several occasions as the latter deliberately sailed near Chinese-claimed islands. Beijing has accused the United States of threatening its national security.