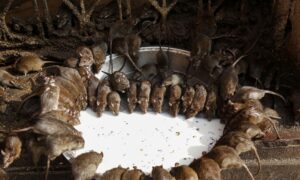 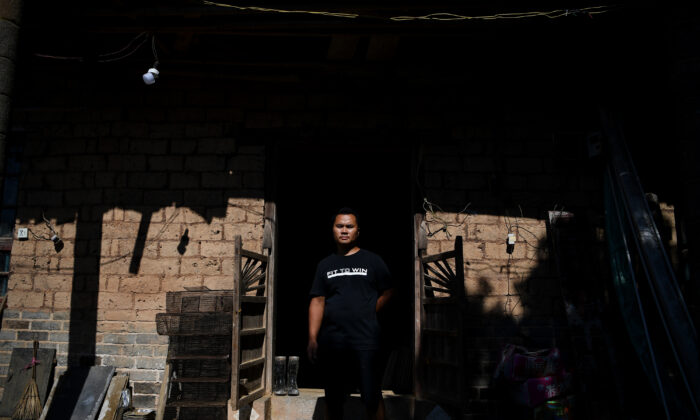 Bamboo rat farmer Liu Yanqun standing in front of a part of his house turned into a rat farm in Loudi in central China's Hunan Province, on Aug. 12, 2020. Beijing said it would step up food safety at food markets and slapped a national ban on the trade and consumption of certain animals. (Noel Celis/AFP via Getty Images)
China Business & Economy

Breeding bamboo rats was once sanctioned by the Chinese regime as a way for poor farmers to be “lifted out of poverty.” For a few years, it was quite effective, as bamboo rats had become a delicacy. Thanks to the positive coverage by social media and various media outlets, demands for these plump rodents had been growing rapidly. However, with the onslaught of the CCP virus, bamboo rats became a politically sensitive issue almost overnight.

In January 2020, Dr. Zhong Nanshan, China’s National Health Committee lead expert,  said that bamboo rats might be linked to the coronavirus. This statement is equivalent to a death sentence for the millions of bamboo rats bred in farms throughout southern China.

The report does not intend to argue that bamboo rats indeed are the culprit of the CCP (Chinese Communist Party) virus, commonly known as the novel coronavirus which causes the COVID-19 disease. What’s worth looking at is the action taken by the Chinese authorities toward the animal and the breeders.

Back in 2003 during the SARS outbreak, Dr. Zhong Nanshan, a pulmonologist, said that civet cats were the source of SARS. On Jan. 21, 2020, in an interview with China Central TV, Zhong claimed that the CCP virus was confirmed to be transmissible among humans and that the source of the virus “may be” wild animals such as bamboo rats or badgers. His remark, to this day, has not been substantiated by scientific research.

Four days later, on January 24, four central government agencies jointly issued an “Emergency Order” to ban wildlife trade in an attempt to curb the spread of the CCP virus. It banned the transportation of bamboo rats and other wild animals, and ordered the existing wildlife to be kept in isolation away from humans.

In February, the National People’s Congress, the legislative arm of the communist state, passed the “Decision to completely prohibit illegal wildlife trade and eliminate the consumption of wild animals.”

The Chinese media made sure that the world knows the CCP issued the above orders as a “prompt and correct” reaction in the wake of the pandemic.

China’s southern province of Guangxi is home to many of China’s ethnic minorities and used to be poverty-stricken. In recent years, breeding bamboo rats was the main lifeline of about 100,000 locals. They breed about 18 million bamboo rats, worth some $310.8 million and accounts for 70 percent of the nation’s total.

The “Order” and the “Decision” not only put the 18 million bamboo rats on death row, but also pushed the rat breeders back into poverty.

The leaked 5-page document (pdf), dated Dec. 28, 2020, lists four areas of propaganda work the foreign affairs office did in 2020. The fourth area is of particular interest.

The document states that in April 2020, a UK media branch office in China hired local Chinese as reporters, who tried to approach and interview bamboo rat breeders in Beihai city. The foreign affairs office successfully blocked the interview, which was labeled “illegal” in the document.

Furthermore, the document states that such incidents are “national security” issues.

U.S.-based Chinese current affairs commentator Li Linyi thinks that the CCP is under tremendous pressure from the international community looking for the origin of the virus. It tries to blame wildlife (bats and bamboo rats), foreign nationals’ travel in China, the U.S. military, or U.S. lab leaks, none of which have been substantiated. Therefore, the CCP treats foreign media interviewing bamboo rat breeders as a sensitive political issue that could jeopardize national security.

Thus, in social media and public opinion spaces, all discussions related to bamboo rats are closely monitored and censored, while the CCP’s mouthpiece media churn out “positive” reports, such as the successful transformation of one bamboo rat breeder to a sheep farmer.

Compensation Plan Only On Paper, Breeders Back to Poverty

In June 2020, the Guangxi provincial government published a compensation plan for the wildlife breeders. The plan says that legal breeders can be paid $28 per bamboo rat.

The documents were issued by a municipal level office in Guilin city. The Internet Opinion Real Time Surveillance Office monitors the social media posts under its jurisdiction of Guilin city and surrounding counties. On Aug. 31, the Office caught a post on a local BBS chat service. The document includes the url and content of the post, as well as the county-level office assigned to handle the post.

The post says, “Since the CCP Central issued the ‘Decision’ [in February], we [breeders] have been strictly following the order and stopped selling, eating, transporting, and releasing the bamboo rats. In over six months, we did not have any income but had to spend our savings to keep the bamboo rats alive. Since the Compensation Plan was released, we thought we had hope, but until now, in our Yongfu county alone, there are several dozen breeders who haven’t received any compensation.”

Another post found on Weibo from someone in the same county expressed similar concerns, but added that they had been categorized as “illegal” breeders, and so they were not eligible to receive any compensation at all.

The documents state that the assigned county office must report back within five days with details about how the social media posts were handled.