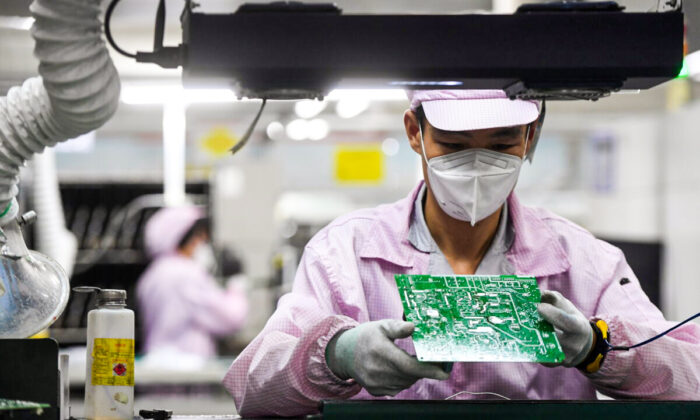 An employee inspects a circuit board on the controller production line at a Gree factory, following the COVID-19 outbreak in Wuhan, Hubei Province, China, on Aug. 16, 2021. (CD via Reuters)
Business & Economy

China-based Gree Electric and two of its subsidiaries, including one in the U.S., have agreed to pay $91 million to resolve criminal charges for not reporting to the Consumer Product Safety Commission (CPSC) that their faulty dehumidifiers could catch on fire.

According to a court filing, Gree executives knew the defective dehumidifiers failed to meet applicable safety standards and could catch on fire but the company covered up the information and delayed reporting for months. The executives were eventually forced to report on the issue as consumer complaints of fires and related damages increased.

Based out of Zhuhai, China, Gree Electric is the largest air conditioner manufacturer in the world with stocks trading on the Shenzhen Stock Exchange.

Charley Loh, 63, chief executive officer of Gree, and Simon Chu, 66, chief administrative officer of Gree USA, have been indicted by the Justice Department with felony charges brought under the Consumer Product Safety Act (CPSA) and wire fraud for the failure to report on a timely basis.

“No one should live in fear that a properly used consumer product might cause injury or death to their loved ones,” said Acting U.S. Attorney Tracy L. Wilkison for the Central District of California in the press release.

“Gree’s months-long delay in reporting known problems with their dangerous and defective dehumidifiers was both criminal and costly. Gree’s decision to delay the reporting of its defective dehumidifiers has resulted in the recall of millions of those products and the payment of millions of dollars. We will not allow companies to profit at the expense of consumers’ health and safety,” Wilkison added.

The tests were not reported and the products were not recalled until September 2013. The reason for the delay, according to the filing was that “cooler fall and winter temperatures would help prevent Gree dehumidifiers from overheating and catching fire, and that there should be very few, if any, dehumidifier fires in the 6 to 9 months following September 2012.”

Between 2007 and 2013, Gree sold almost two million dehumidifiers in the country under different names including Kenmore, GE, and Frigidaire.

As part of the deferred prosecution agreement (DPA), on or about July 26, 2012, Loh, the CEO, saw a video of a burning Gree dehumidifier. Loh forwarded the video immediately to a Gree Hong Kong director, in charge of U.S. exports, saying that the video was “scarey [sic] to just watch” and a “very serious issue with GREE product quality.”

After subsequent testing and discovering that the products could catch on fire, Loh again emailed the Hong Kong director stating, “the result is not like what you have told us,” and “the result shows the units all can catch the fire and apparently the material is not according to UL standard! I don’t think the factory is telling us the fact and truth.”

On March 14, 2013, the company reported to the CPSC about consumers complaining about dehumidifiers catching on fire and damaging their property, but failed to mention that the defective product was the cause of the issue. Moreover, Gree sold products to retailers with a false representation that the dehumidifiers met all industry standards.

In the following month, an independent test report revealed that the plastic used in the dehumidifiers was inferior and did not meet the standards for fire resistance.

“United States consumers lost at least $17,400,000 by purchasing defective and dangerous Gree dehumidifiers,” and “sustained at least $2,100,000 worth of property damage” between September 2012 and April 2013, according to the plea agreement (pdf).

Finally, on Sept. 12, 2013, Gree announced a voluntary recall of 2.2 million dehumidifiers in the United States. By this time, however, consumers had reported more than 2,000 incidents with 450 fire issues and more than $19,000,000 in property damages.

During the period between September 2012 and April 2013, Gree was able to receive more than $39,000,000 in proceeds from distribution and wholesale. This amount is considered forfeiture for their failure to report immediately to the CPSC.

“This historic criminal enforcement action should serve notice that the CPSC will use its authority to the fullest to keep American families safe,” said Chair Alex Hoehn-Saric of the CPSC in the press release. “Failing to report dangerous products puts consumers at an unnecessary risk and will not be tolerated.”

The CEO and CAO have pleaded not guilty and the trial is scheduled for March 15, 2022, in Los Angeles.