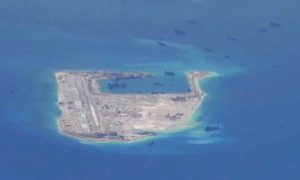 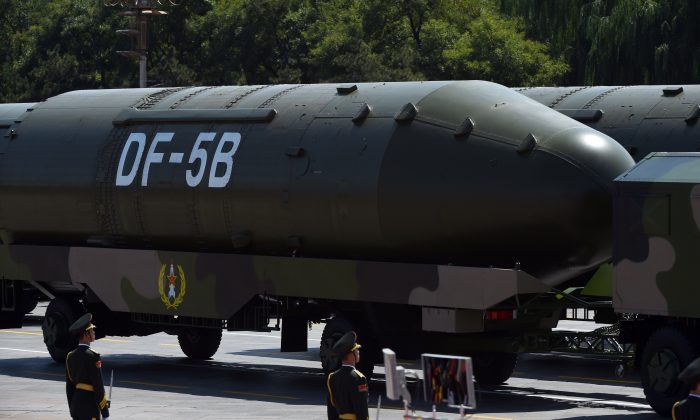 A DF-5B missile is displayed at a military parade at Tiananmen Square in Beijing on September 3, 2015. (GREG BAKER/AFP/Getty Images)
US-China Relations

China is not a party in the 2011 New Start strategic nuclear arms limitation treaty between the United States and Russia, but a sober assessment of China’s growing nuclear arsenal should be part of Washington’s decision on whether to renew or extend this treaty when it expires in 2021.

Consideration of China’s growing arsenal of medium and intermediate range ballistic and cruise missiles—also not included in the 1987 U.S.-Soviet Intermediate Nuclear Forces (INF) Treaty—contributed to the Trump administration’s decision to withdraw from this treaty.

When considering reloads for most Chinese launchers for INF-range (500 kilometers to 5,000 kilometers) missiles, this analyst estimates China’s People’s Liberation Army (PLA) may have up to 1,800 of such missiles.

Neither Chinese nor U.S. official sources provide total numbers for the PLA’s INF-range missiles, but 1,800 is the same number Russia destroyed back when it was complying with the INF Treaty. In contrast, the United States deploys no medium or intermediate range ballistic missiles in Asia to defend its allies or U.S. forces.

Negotiated by the Obama administration, New Start obligates Russia and the United States to limit their intercontinental nuclear forces to 1,550 deployed warheads, with 700 deployed missiles and bombers. Subsequently, some in the Obama administration wanted to reduce warhead numbers to 1,000, but this was rebuffed largely by U.S. military leaders.

While New Start does provide an inspection regime valued by the United States and Russia, actions by the latter are undermining the hoped-for stability. This year, Russia may arm an intercontinental ballistic missile (ICBM) with its Avangard, the world’s first intercontinental range maneuverable hypersonic glide vehicle (HGV) warhead, which may be invulnerable to existing U.S. missile defense systems.

Russia’s Sarmat ICBM, which is currently under development, has sufficient range to conduct attacks around the South Pole, whereas most U.S. strategic surveillance is concentrated on covering attacks over the North Pole.

Concern over China’s nuclear forces starts with growing China-Russia cooperation in missile defense; both held strategic defense “command post” exercises in 2016 and 2017. This raises the question of whether Moscow and Beijing may already be exploring missile offense cooperation.

In 1969, U.S. nuclear missile threats deterred the Soviet Union launching nuclear attacks against China; might Moscow return the favor and join China in nuclear threats against the United States to prevent its defense of Taiwan in the event of a Chinese attack?

Then there are questions regarding China’s nuclear warhead numbers. Again, Chinese and U.S. official sources do not provide credible current numbers. Oft-cited open sources such as the Stockholm International Peace Research Institute (SIPRI) credit the PLA with 280 nuclear warheads for intercontinental and lesser range missiles.

But for some PLA ICBM types there are two or three units, and then there is a question whether ICBM units utilize missile reloads, as do the PLA’s medium-range and short-range missile units. If you count two units each with one missile reload for all PLA ICBMs, plus the 60 SLBMs, the potential number of warheads approaches 1,000.

Today, the PLA has deployed two variants of multiple warhead-capable liquid fuel ICBMs in silos, the DF-5B (3 warheads) and the DF-5C (ten warheads). Solid-fueled and mobile multiple-warhead ICBMs include the ten-warhead capable DF-41, in road-mobile and railroad-based versions.

One cannot help but suspect that if it desired to do so, China could by the early to mid-2020s deploy many additional intercontinental range missiles, with numbers of warheads that approach the limits set by New Start.

On top of this, it seems some Russian experts have similar concerns. In 2012, former Russian Strategic Rocket Forces Chief of Staff General Victor Esin estimated that the PLA had 800-900 “deployed” nuclear warheads on its ICBMs, medium, short range ballistic missiles, and cruise missiles.

Over the last three decades, bipartisan U.S. support for strategic weapons modernization has, for many liberals, hinged on Washington’s continued pursuit of strategic weapons limitation agreements with Russia, today under stress from Russian nuclear developments.

China, however, has for decades rebuffed U.S. attempts to engage it in formal strategic weapons dialogues and rejects any measures that would limit its nuclear weapons. This continued on Feb. 17 at the annual Munich Security Conference, when Chinese Communist Party Politburo member Yang Jiechi turned down German Chancellor Angela Merkel’s call for China to join the INF Treaty.

With Beijing’s rejection of the arms control option, China’s growing nuclear weapon inventory and its potential for rapid growth should prompt questions. Is it wise for the United States to persist with New Start warhead and missile limits after 2021 if there is a possibility that China, prone to nuclear weapons cooperation with Russia, could also have nuclear weapon numbers approaching those of Russia and the United States?

Does China’s potential theater range nuclear missile inventory, and potential for increasing its intercontinental nuclear missiles, mean that the United States should in turn be looking to rapidly build up its theater range nuclear forces while preparing for an additional requirement to rapidly expand its intercontinental nuclear forces?

Richard D. Fisher, Jr. is a senior fellow with the International Assessment and Strategy Center and author of “China’s Military Modernization: Building for Regional and Global Reach,” Stanford, 2010.