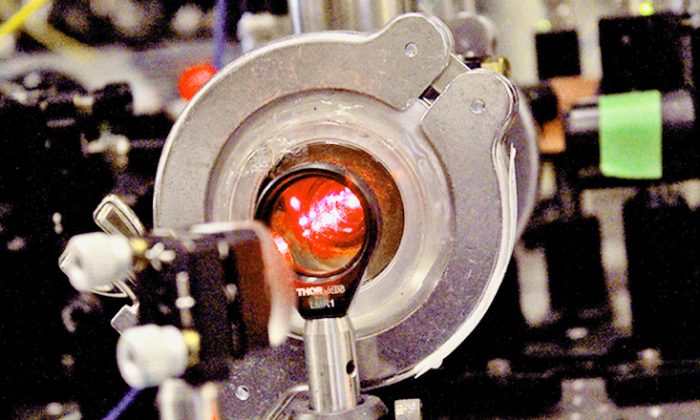 Scientists built their own apparatus in a basement lab. It is an elaborate tangle of wires, computers, electrical components, tabletop mirrors, and a cryogenic refrigeration unit. "If you wanted to put a picture of something high-tech in the dictionary, this is what it might look like," Dave DeMille says. "It's deeply orderly, but with a bit of chaos." (Michael Helfenbein)
Science

Physicists have chilled molecules to almost absolute zero using lasers fired from an apparatus they built in the lab.

The molecules—bits of strontium monofluoride (SrF)—are the coldest ever achieved through direct cooling. The team dropped the molecules to 2.5 thousandths of a degree above absolute zero using a process called magneto-optical trapping (MOT).

The discovery opens the door for further experimentation into everything from precision measurement and quantum simulation to ultracold chemistry and tests of the standard model of particle physics.

“We can start studying chemical reactions that are happening at very near to absolute zero,” says Dave DeMille, a Yale University physics professor and principal investigator. “We have a chance to learn about fundamental chemical mechanisms.”

Magneto-optical trapping has become ubiquitous among atomic physicists in the past generation—but only at the single-atom level. The technology uses lasers to simultaneously cool particles and hold them in place.

“Imagine having a shallow bowl with a little molasses in it,” DeMille explains. “If you roll some balls into the bowl, they will slow down and accumulate at the bottom. For our experiment, the molecules are like the balls and the bowl with molasses is created via laser beams and magnetic fields.”

Until now, the complicated vibrations and rotations of molecules proved too difficult for such trapping. The Yale team’s unique approach drew inspiration from a relatively obscure, 1990s research paper that described MOT-type results in a situation where the usual cooling and trapping conditions were not met.

DeMille and his colleagues built their own apparatus in a basement lab. It is an elaborate, multi-level tangle of wires, computers, electrical components, tabletop mirrors, and a cryogenic refrigeration unit. The process uses a dozen lasers, each with a wavelength controlled to the ninth decimal point.

“If you wanted to put a picture of something high-tech in the dictionary, this is what it might look like,” DeMille says. “It’s deeply orderly, but with a bit of chaos.”

Pulses of SrF shoot out from a cryogenic chamber to form a beam of molecules, which is slowed by pushing on it with a laser.

“It’s like trying to slow down a bowling ball with ping pong balls,” DeMille explains. “You have to do it fast and do it a lot of times.”

The slowed molecules enter a specially shaped magnetic field, where opposing laser beams pass through the center of the field, along three perpendicular axes. This is where the molecules become trapped.

“Quantum mechanics allows us to both cool things down and apply force that leaves the molecules levitating in an almost perfect vacuum,” DeMille says.

The researchers chose SrF for its structural simplicity—it has effectively just one electron that orbits around the entire molecule.

“We thought it would be best to start applying this technique with a simple diatomic molecule,” DeMille says.

The lead author of the paper is John Barry, a former Yale graduate student now at the Harvard-Smithsonian Center for Astrophysics. The research is published in the journal Nature.