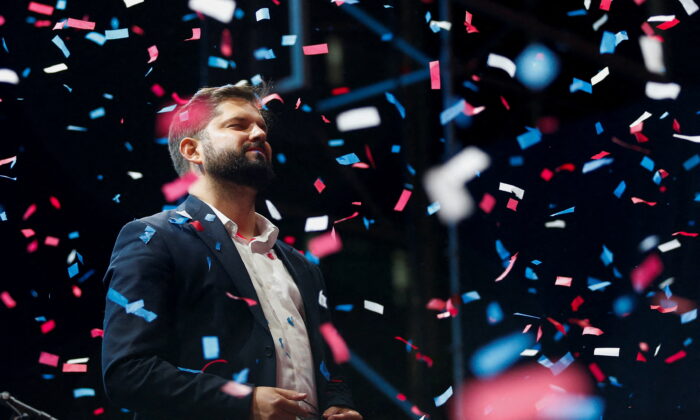 Here in the United States, our global geopolitical focus tends to be transoceanic; that is, our primary concern has long been communist powers on the other side of the world—first the Soviet Union beyond the Atlantic and Europe, and more recently, the People’s Republic of China across the Pacific.

We shouldn’t, however, overlook the communist challenge in our own hemisphere. For at least six decades there has been a titanic struggle in Latin America between those who favor socialism (i.e., centrally planned economies) and those who favor market (i.e., decentralized) economies.

There was a significant development in that ongoing struggle recently: The South American country Chile elected a new president, Gabriel Boric, “a 35-year-old, leftwing former student leader” whose supporters include “a revolutionary student movement and the Communist party,” according to The Guardian.

My interest in Boric’s election has a deeply personal dimension. After translating the Latin of Julius Caesar and Virgil during my first two years of high school, I decided to learn a language that I could speak. My choice was Spanish, which eventually led to Spanish being my undergraduate major in college.

In my junior year, my Spanish 1 teacher was Sam Salas, a Chilean. The following year, my Spanish 2 teacher was another native Spanish-speaker, a wonderful man with the most Catholic name I have ever encountered: Jesús de la Cruz (Jesus of the Cross), a Cuban. Both men were masterful teachers and wonderful human beings. I don’t know why Salas emigrated from Chile, but de la Cruz, a middle-aged man who had been a prosperous attorney in Cuba, escaped his homeland in a small boat, bringing little to the States other than his wife and children. This humble, gracious man never talked about Cuba, but there was often an air of sadness about him—although he showed great character by always being cheerful in class. What Fidel Castro and the communists had done to Cuba grieved him.

How interesting it has been for me that my first two Spanish teachers represented the polar extremes on the Latin American political continuum: Chile has had the most market-oriented (and not coincidentally, the most prosperous) economy in Latin America, and Cuba, throughout more than 60 years of communist rule, has been the most rigidly socialistic (and not coincidentally, the poorest) economy in the region. A Russian friend of mine, who defected from the USSR in 1989, visited Cuba about 15 years ago and stated categorically that poverty in Cuba was even more severe and ghastly than it had been in the Soviet Union. Indeed, for decades under Castro, Cuba was the unchallenged titleholder of “poorest Spanish-speaking country in the world” until Cuba Version 2.0 (otherwise known as Venezuela, whose dictator, Nicolás Maduro, has been called a Cuban puppet) began to compete with them for that “honor” in the last few years.

For those who don’t know the history, Chile almost followed Cuba down the tragic path to socialism in the early 1970s. Marxist Salvador Allende was elected president with approximately 36 percent of the vote in 1970. By 1973, inflation was raging and the economy was collapsing. Housewives protested in the streets, banging pots and pans as Allende strangled the economy with socialist policies. Finally, the country’s Chamber of Deputies passed a resolution accusing Allende of violating the constitution and calling for the restoration of constitutional order. It was in response to that resolution that Gen. Augusto Pinochet deposed Allende in September 1973 and seized the reins of power. (Allende himself died, possibly by suicide, during the chaos.)

Pinochet mercilessly hunted down leftist leaders and crushed the Marxist supporters of Allende. He assumed the presidency of Chile and ruled for 17 years. (He eventually left office peacefully in 1990 after losing Chile’s first presidential election since Allende’s election 20 years earlier.) As he consolidated his powers, more than 2,000 individuals, undoubtedly including some innocent people who simply were in the wrong place at the wrong time, “disappeared.”

Here in the United States, the mainstream media and sundry “intellectuals” showed their moral bankruptcy by condemning Pinochet for “los desaparecidos” at the same time that they lionized Cuban dictator Fidel Castro who had “disappeared” at least four times as many of his political opponents in Cuba as Pinochet had in Chile. Apparently, those American commentators believe that “disappearing people” is permissible in the service of imposing communism, but impermissible in the cause of defeating communism.

Just as telling, the pro-Castro forces in this country often praised him for the supposedly superior accomplishment of de-developing Cuba and turning it into an economic basket case in the name of “the people” and “social justice” (favorite communist slogans) while denouncing Pinochet’s autocratic rule, even though his policies led to vibrant economic growth and much higher standards of living for the Chilean people.

Being economically ignorant, Pinochet, after being president for a couple of years, asked for policy recommendations from the so-called “Chicago boys”—free-market economists who had studied at the University of Chicago. Following their recommendations, Pinochet liberated markets from state control. He removed various price controls, cut bureaucratic red tape, drastically shrank government spending, and privatized as much as 90 percent of public companies. Most famously, Pinochet authorized a privatized retirement system that financed vigorous economic expansion in the ’80s and ’90s.

On the negative side, Chile’s economic turnaround was very bumpy and protracted for a variety of reasons, including the economy having been so badly wrecked by Allende, monetary policy mistakes, a worldwide recession in the early ’80s, and the perennial problem (possibly a universal tendency, but a glaring feature of Latin American society for the past half-millennium) of cronyism, by which ownership of many valuable state-owned properties was transferred on unfairly favorable terms to an already prosperous elite.

Overall, though, the reforms resulted in a fourfold increase of Chilean per capita income in only 40 years, while the poverty rate has fallen from 45 percent to 8 percent and the middle class has expanded from 23.7 percent to 64.3 percent of the population.

Once again, though, what I call “the paradox of prosperity” has reared its head. On Dec. 19, a majority of Chileans voted against the very policies that brought them the highest standard of living in Latin America. By electing a young man to the presidency who has “pledged to bury Chile’s ‘neoliberal’ past of market-oriented policies that are widely considered to have helped drive decades of rapid economic growth but also stoked inequality,” the Chilean people may be committing economic suicide. Distracted by the inequality bugaboo, they seem blind to the reality that the standard of living of Chile’s poor has been rising under “neoliberal” policies. That stands in marked contrast to socialist economies (e.g., Cuba and Venezuela) where economic stagnation for all but the political elite is the norm.

The “great sin” of capitalism is that some individuals advance economically more rapidly than others, but the important point is that society in general advances. One can only hope that Chile will not throw out the baby with the bathwater—that is, that they will find ways to improve the economic wellbeing of their poorest compatriots without jettisoning the economic policies that have prospered the country so greatly. Perhaps President-elect Boric will turn out to be wiser than his leftist rhetoric would indicate and he will turn out to be a statesman rather than a revolutionary ideologue. Good luck to the Chilean people.