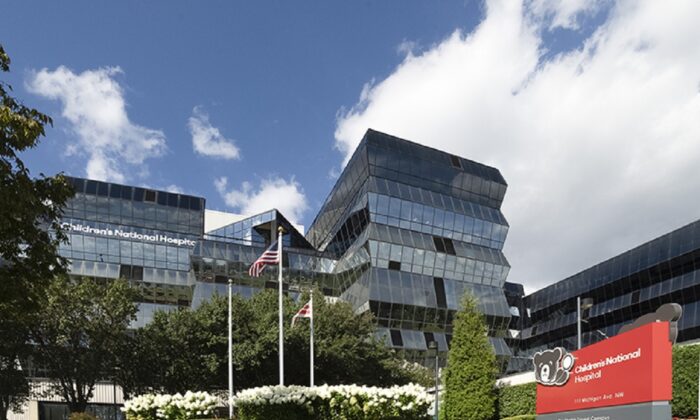 A children’s hospital in Washington is denying that it has performed sex change surgeries on minors after two workers were recorded saying a 16-year-old could get a sex change surgery and the hospital on its website offered “gender-affirming hysterectomies” to children essentially from birth.

Children’s National Hospital, primarily funded by U.S. agencies, stated on its website that it was offering “the following services” for patients “between the ages of 0–21.” Among the services were “gender-affirming medical care and gender-affirming hysterectomy.”

Gender-affirming is a term used to describe a suite of treatments that are aimed at changing a person’s sex. A hysterectomy is a surgery to remove the uterus.

Chaya Raichik, who runs the Libs of TikTok social media accounts, called Children’s National to ask about the offer. According to audio of the call she released, two different workers confirmed that “gender-affirming hysterectomy” was available to children younger than 16.

Children’s National isn’t disputing the call but claims that it has never done the procedure for any minors.

“Children’s National Hospital is committed to fostering a welcoming and inclusive environment for all and to serving our LGBTQ+ patients and families in the full spectrum of their care. We do not provide gender-affirming hysterectomies to patients under the age of 18. In fact, in DC you cannot perform a hysterectomy in a minor without a court order,” the hospital told The Epoch Times in an email.

After it was noted that an archived version of the hospital’s website stated otherwise, the hospital noted that the page was “poorly designed and listed medical services in a confusing manner.” The page now makes no mention of “gender-affirming” treatments or surgeries.

Children’s National still has a page describing a “Gender Development Program,” which states in part that some children “may live and dress in ways typical of another gender (gender non-conformity), and some may experience the need to live and be affirmed as this gender in some or all settings.”

“We work with gender exploring, gender non-conforming, gender dysphoric, gender non-binary, transgender, and gender-questioning young people, and we see children and adolescents of all ages,” the page reads.

After the audio was released and more people became aware of Children’s National Hospital’s offer of minor sex change surgery, the hospital stated that it has been targeted by “a large volume of hostile phone calls, social media messages, and emails.”

It claims that it has been subject to a campaign of “misinformation,” or false or misleading information.

A similar situation unfolded earlier this month. Boston Children’s Hospital was offering “gender-affirming hysterectomy” to minors, but after Raichik and others drew attention to the offer, the hospital updated its website and claimed that it doesn’t perform the surgery on minors.

The hospital still offers other surgeries, such as breast removal, for some minors.

“Last week, when we learned of the death threats being made against teams at another children’s hospital, we assessed that page and made adjustments to ensure the information was clear and accurate. We did not want a poorly crafted web page to put our team in danger,” Children’s National told The Epoch Times.

Raichik said in a blog post that she was shocked when she was told by hospital workers that minors could get sex change surgery, describing a hysterectomy as “a permanent, irreversible procedure that makes it impossible for [a girl] to bear children later in life.”

“These barbaric procedures on minors need to be criminalized. Instead, they’re being promoted and widely encouraged—at least until you draw attention to that fact. Then, the gaslighting begins, and they assure you that no such thing is happening.”