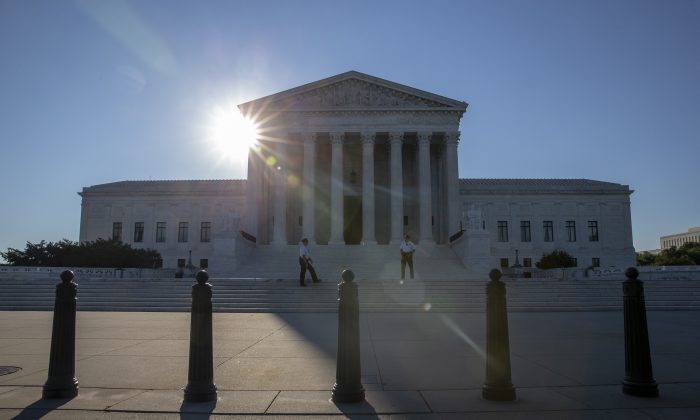 The sun rises over the United States Supreme Court on the morning of July 10, 2018 in Washington, DC. (Alex Edelman/Getty Images)
US News

Chief Justice John Roberts temporarily blocked the scheduled Oct. 29 start of the trial of an unusual lawsuit in Oregon, in which a group of young people is seeking a declaration that the Constitution requires the federal government to take action against climate change.

A limited-government group praised the decision.

“The Supreme Court is acknowledging what we have really known all along: this is a policy issue that belongs in the Halls of Congress, not the courts,” Frank Maisano of the Policy Resolution Group told The Daily Caller.

The legal proceeding, according to critics, is a political stunt aimed at raising public awareness of environmentalist groups’ controversial claim that the consumption of oil and other fossil fuels boosts the emission of greenhouse gases which in turn leads to changes in the earth’s climate that could prove catastrophic in the long term.

If the lawsuit succeeds at trial, the government could be required to develop a far-reaching policy to crack down on the emission of greenhouse gases throughout multiple sectors of the economy, a move that could inflict long-lasting damage on the economy without necessarily having much, if any, impact on climate change.

The government already has significant regulatory power to curtail pollution, including the emission of greenhouse gases, but the Trump administration doesn’t wish to gain additional regulatory power in this arena. In fact, President Donald Trump has been on a crusade to cut bureaucratic red tape at the government, in order to promote economic expansion and job growth.

The lawsuit, filed in U.S. District Court in Oregon on Aug. 12, 2015, by 21 young plaintiffs who then ranged in age from 10 to 21, is known as Juliana v. United States. In it, the plaintiffs claim the United States has known for more than 50 years that carbon dioxide “pollution from burning fossil fuels was causing global warming and dangerous climate change, and that continuing to burn fossil fuels would destabilize the climate system on which present and future generations of our nation depend for their well-being and survival.”

Despite knowing that the use of fossil fuels would “significantly endanger” the plaintiffs, the government continued allowing those fuels to be used and sources of the fuels to be developed, the legal complaint states.

Specifically, the lawsuit singles out the Jordan Cove liquefied natural gas (LNG) terminal in Coos Bay, Oregon, which it claims “will significantly increase the harm” caused by fossil fuels and “enhances the cumulative danger caused” by the government’s actions protecting and promoting the use of fossil fuels.

The plaintiffs want the court to declare that the government has “violated” and continues to violate the plaintiffs’ “fundamental constitutional rights to life, liberty, and property by causing dangerous [carbon dioxide] concentrations in the atmosphere and dangerous government interference with a stable climate system.” The plaintiffs are seeking an injunction preventing the government “from further violations of the Constitution underlying each claim for relief.”

In a legal memorandum dated Oct. 19, Roberts ordered the beginning of the trial delayed, and temporarily halted the pre-trial fact-finding process, Bloomberg News reports. The chief justice gave plaintiffs until Oct. 24 to respond to the Trump administration’s emergency request, dated Oct. 18, to prevent the trial from moving forward.

“We are confident once Chief Justice Roberts and the full court receive the youth plaintiffs’ response to defendants’ mischaracterization of their case, the trial will proceed,” said plaintiffs’ attorney Julia Olson.