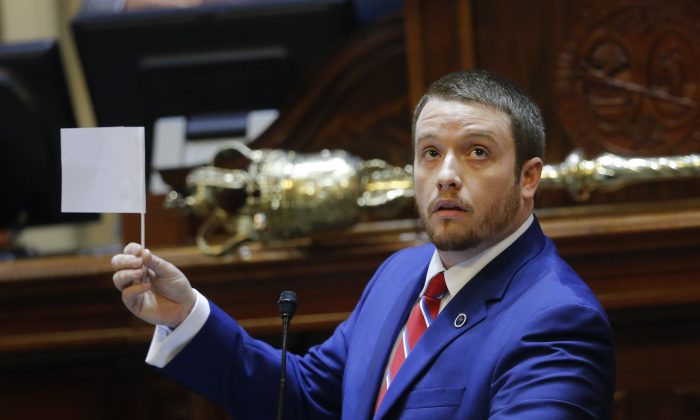 Rep. Christopher Corley, R- Aiken,on Wednesday, July 8, 2015, in Columbia, S.C. The House is under pressure to act after the state Senate passed its own measure, which is supported by Gov. Nikki Haley. But some Republicans proposed changes to the Senate bill that would preserve some kind of symbol in front of the Statehouse to honor their Southern ancestors. (AP Photo/John Bazemore)
Crime and Incidents

AIKEN, S.C.—Children can be heard screaming “just stop daddy” on a 911 call made from the home of a South Carolina legislature accused of beating his wife and pointing a gun at her.

Republican Rep. Chris Corley of Graniteville is charged with two felonies. Corley’s wife told deputies he stopped hitting her late Monday only after noticing she was bleeding.

Corley said his wife tried to punch him after accusing him of cheating.

In the first 911 call to Aiken city police, no one talks to the operator but “please stop” can be heard repeatedly. That prompted the dispatcher to call Aiken County 911, saying she heard “children screaming for help and begging for their father to stop.”