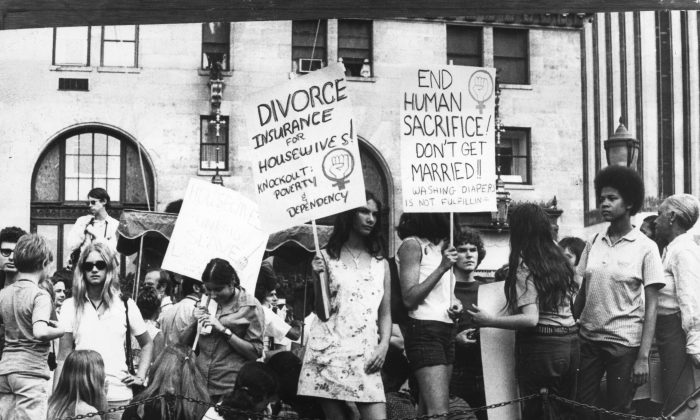 Children of the Great Scattering: Life After the Sexual Revolution

Like fools, we rushed in. I came of age politically in the 1960s, earned my doctorate in the 1970s, and taught social work students (mostly at masters and doctoral level) until retiring in 2011.

In the first period of the sexual revolution, my students and I mostly celebrated the revolution as a period of liberation for adults, especially women, from the constraints of tradition, law, and custom.

Insofar as we considered at all the impacts of the revolution on children, families, and communities, we minimized them or saw them as beneficial. Easy divorce would free children from having to grow up in loveless, conflict-ridden families. Thanks to the pill and abortion, all children would be “wanted.” Children would be freed from the stigma of their parents’ divorce or their mothers’ unmarried status, cohabitation with an unrelated man, or other nontraditional family structures.

We didn’t consider seriously the coming drop in fertility and the shrinkage of families. What was the impact on children to spend, as half of them now do, at least some of their childhood without one or both biological parents? What was the social impact of fatherlessness, of growing up with few or no siblings, of having few cousins, aunts, uncles, or little involvement of the father’s side of the family?

Sometimes, especially at the end of the 20th century, a family scholar sounded the alarm, but far too few of us seriously examined these questions.

These issues go to the heart of almost every social problem social workers address. Yet my students and I had difficulty discussing them frankly, no doubt in part because many or most of us were directly affected by them in a world of divorce, premarital sex, cohabitation, and lone parenthood.

There was also concern that noticing the adverse outcomes in education, criminal justice involvement, employment, mental health, and just about every other social indicator, from fractured families and fatherless children would stigmatize single mothers, children born out of wedlock, and cohabiting couples.

So we talked, not about the family, but families, as if one kind of family structure was as good as another and it was discriminatory to say otherwise. We could call for more public resources to meet the needs of single mothers and their children and praise the heroic struggles made by such mothers, but not worry that such family structures themselves disadvantaged children or that the government was bankrolling and incentivizing them by substituting for the role of fathers as providers and protectors.

Many of us saw such dependence on government as liberating women and children from dependence on men. Some described marriage, in the common phrase of the time, as a “hitting license”—ignoring the research evidence that women were safer in marriage than in any other kind of relationship, such as cohabitation. Children were most at risk of violence and abuse when living with their mother and her partner who wasn’t the children’s biological father.

Textbooks used in marriage and family courses treated marriage as pathological rather than what it had been understood as since it was recognized in the first legal codes millennia ago—as the optimum setting for raising children and assuring paternal responsibility. They continued to expound these distortions and expose hundreds of thousands of students to their ideology long after researchers of all political persuasions had shown them to be false.

Against all evidence, textbook authors, publishers, and professors persisted in perpetuating a false narrative about marriage and the needs of children as if it were factual.

Children of the Great Scattering

They grew toward adulthood in a state of panic over identity. They had lost the experience of a natural, intact family, not to war or disease but to the sexual consumerism of their parents. In the process, they were bereft of a clear answer to the question “Who am I?”

Previous generations, Eberstadt says, had answered the question in terms of their expectation of growing up in a family—the expectation that they would have children and a family themselves, that parents and siblings and extended family would remain their primal community, and thus, that it was a tragedy not to be part of a family.

Eberstadt discusses many aspects of the “Great Scattering” of families and the angry responses to it.

In some cases, young people whose interests were ignored when they were babies—like the children of anonymous sperm donors who were conceived with the deliberate intent from the start that they would grow up fatherless, without knowledge of or contact with their own biological father—found their own voice as young adults.

Unlike adoption, which had developed as a way to provide a child without a functioning family with parents, the aim in surrogacy was to meet the desires of adults, not the needs of children. But those children grew up and expressed publicly their sense of loss, as in organizations like The Anonymous Us Project and Stop Surrogacy Now.

One of the most striking manifestations of the anger and loss of sense of belonging is the profound shift in the pop music that children of the Great Scattering drove up the charts. It was no longer the music of abandon of their parents’ youth but, as Eberstadt says, the music of abandonment. It was anger—expressed most powerfully, but not only, by rap superstar Eminem, against parents, especially fathers, for breaking up their families and leaving them to grow up with a dysfunctional childhood.

As Eberstadt puts it, “During the same years in which progressive-minded and politically correct adults have been excoriating Ozzie and Harriet as artifacts of 1950s-style oppression, millions of American teenagers have enshrined a new generation of music idols whose shared signature in song after song is to rage about what not having had a nuclear family had done to them.”

In some cases, especially on college campuses, the identity rage took on irrational, preadolescent forms. Protesters behaved like children having a tantrum, shouting down speakers on campus with different views from their own, crying, chanting, screaming, or taping their mouths shut as if they were the ones being silenced rather than doing the silencing.

Shorn of identity rooted in family, argues Eberstadt, young people adopted alternative nonfamily identities as ways of being—defining the self in terms of combinations or “intersections” of race, sex, sexual appetite, and “gender”—with some curious results.

In its coarseness, vulgarity, swagger, and belligerence, says Eberstadt, feminism in its latest phase (as in the Women’s March) has adopted some of the more obnoxious features of the “toxic masculinity” it deplores. Feminism manifests the “routine renorming of women toward men”—the message continually given to women that, to succeed, they must behave like men. It’s a message that, far from liberating women, traps them in the paradigm of being “failed men.”

These, a generation later, are some of the poison fruits of the sexual revolution that we rationalized as being in the interests of everyone. But it was, as much as anything, a revolution in parenthood—in the subordination of children’s needs to the desires of adults.