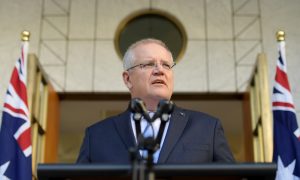 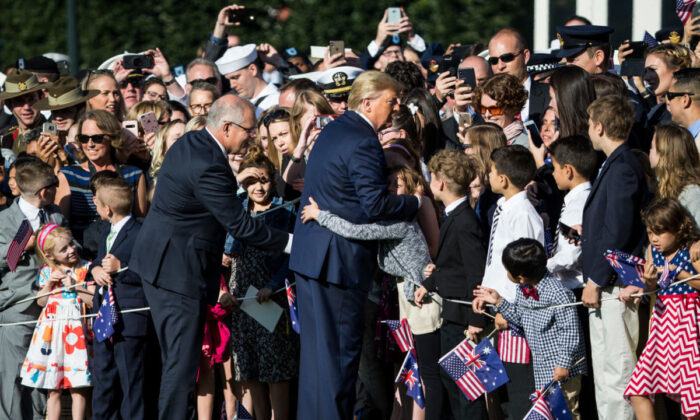 President Donald Trump and Australian Prime Minister Scott Morrison greet members of the audience during an official visit ceremony at the South Lawn of the White House, Washington, on Sep. 20, 2019. (Zach Gibson/Getty Images)
US News

President Donald Trump got hugs from two children when he and the Australian Prime Minister Scott Morrison walked over to the people gathered at the White House to welcome Morrison, who is on a week-long visit to the United States.

As Morrison and Trump made their way down the line of handshakes, a young boy in a gray suit and tie couldn’t visibly contain his excitement of being so close to the president. When the president came closer he leaned over to hug him and Trump reciprocated.

A short moment later, while people kept clicking pictures and shaking hands with Morrison and Trump, another girl hugged Trump. Handshake lines are set up to allow leaders to interact with the gathered public.

Morrison is just the second world leader to be granted the high diplomatic honor of a state visit during the Trump administration.

President Donald Trump later said in the welcoming ceremony that “today we celebrate the long, cherished, and unwavering friendship between the United States and Australia.”

Trump and Morrison participated in a day filled with meetings, a joint press conference, and a lavish state dinner.

The two leaders are seeking to demonstrate a strong alliance. Morrison said the world is a better place because of the United States and that the two nations “see the world through the same lens.”

“We believe in the capacity of enterprise and free markets to create wealth and to lift all, and for free and fair trade to bring nations closer together. We believe that governments derive their power from the consent of the governed and that the ballot box and democracy is the surest foundation for peace and security. And we believe in the rule of law and freedom of association,” Morrison said in a statement.

The Australian Prime Minister is scheduled to visit NASA, the U.S. Space Agency, and will also visit Chicago to meet tech entrepreneurs during his week-long visit from Sep. 17 to Sep. 27.

Trump said that the United States and Australia share an “unbreakable bond” which is based on “history, tradition, and culture.”

“On behalf of every American, I extend my profound thanks to the people of Australia for sacrificing with us in our shared fights against the menace of fascism, communism, and radical Islamic terrorism,” Trump said in a statement at the Arrival Ceremony.

“As we begin the next century of our truly extraordinary partnership, I know that America and Australia will remain forever united in defense of our liberty, our sovereignty, and our most treasured values.