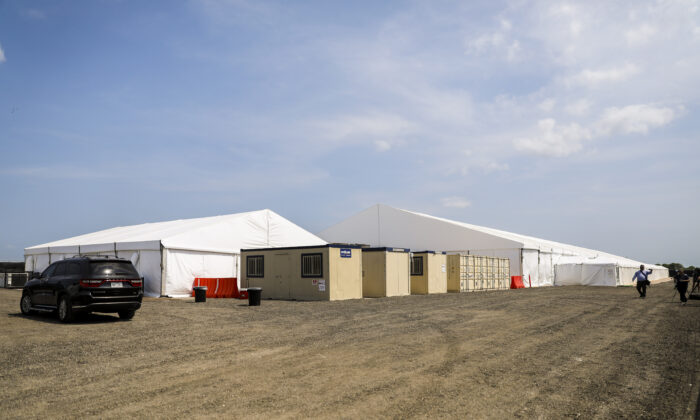 A lawyer representing unaccompanied youth in U.S. government custody said some of the children held by the United States described crowded quarters and were not allowed outside.

Neha Desai, the lawyer, said that some of the children at a Customs and Border Protection (CBP) facility in Donna, Texas, are being held as long as seven days before being transferred to Department of Health and Human Services (HHS) facilities.

“There was a staggering amount of very young children,” Desai told CBS.

Desai said the children described overcrowding that was so severe they had to take turns sleeping on the floor and some said they were only allowed to shower once.

Others allegedly told lawyers “about how they never saw the sun.”

The interviews were conducted on March 11 outside the holding facility. The lawyers from the National Center for Youth Law were denied access to the inside. The Biden administration has also refused press requests.

CBP is only legally allowed to hold unaccompanied minors for up to 72 hours, though Biden administration officials have acknowledged that some of them are being detained longer than that.

The United States is in the midst of an illegal immigration crisis, with more than 100,000 apprehensions recorded at the U.S.-Mexico border in February alone.

That figure portends even higher numbers in the coming months, since the summer is typically peak migration season.

“That the numbers are so high so early is a harbinger of bad things,” Andrew Arthur, resident fellow in law and policy for the Center for Immigration Studies, told The Epoch Times.

Nearly 9,500 unaccompanied minors, or children who aren’t with an adult, arrived at the southern border last month, a jump of over 3,700 from January.

The surge in children, coupled with COVID-19 recommendations, has triggered the reopening of multiple facilities near the border, along with the sending of Federal Emergency Management Agency workers to help deal with the influx.

In a call with reporters last week, CBP officials refused to say how many children were in their custody. “It’s always fluctuating as we work [with other agencies] to move the children into a safer environment,” Troy Weaver, a senior agency official, said.

“While we can’t provide numbers on children in custody and how long they’ve been in custody, I just want to be very clear here that that border patrol stations are not places for children and we do everything in our power to move them through as quickly as we can,” another official added.

The agency is working closely with the HHS, which has said it’s boosting capacity for unaccompanied minors.

Weaver said the Donna facility has a recreation area and that meals are provided three times a day, along with showers at least every 48 hours.

“We appreciate the extraordinary challenge that the government faces in undoing the damage of the prior administration’s immigration policies,” Desai told CBS. “That said, it is deeply concerning to see young children in facilities for days on end, unable to take a shower, call their families, or see the sunlight.”

The White House has said it is working on transforming the immigration system to a more “humane” version.

Meanwhile, White House press secretary Jen Psaki told reporters on Friday, “now is not the time to come” and “the majority of people are turned away at the border.”

“I know that what people are looking at is that there are more children who are coming across the border, and we’ve certainly confirmed and acknowledged that,” she added.