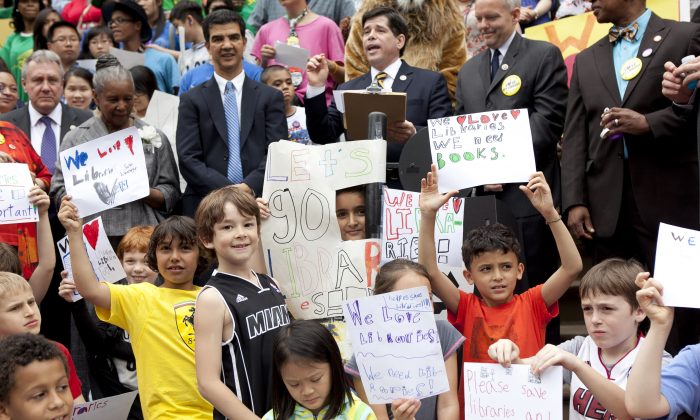 Children during a press conference at City Hall criticizing the budget cuts libraries will be facing on May 22. (Samira Bouaou/The Epoch Times)
New York

NEW YORK—About two dozen children who joined a press conference and rally on the steps of City Hall o May 23 to protest $106.7 million in budget cuts to public libraries.

“They give us a library card no matter what our age is,” said third-grader Preston Ferraiuolo from Brooklyn. “Libraries cannot be taken for granted!”

Led by Council member Jimmy Van Bramer, chair of the City Council’s Cultural Affairs, Libraries and International Group Relations Committee, the rally was packed with the heads of the New York, Queens, and Brooklyn libraries, and numerous City Council members.

Immediately after the rally, Van Bramer introduced a bill to the City Council to get the money reinstated. His promise to stop the impending cuts was echoed by others.