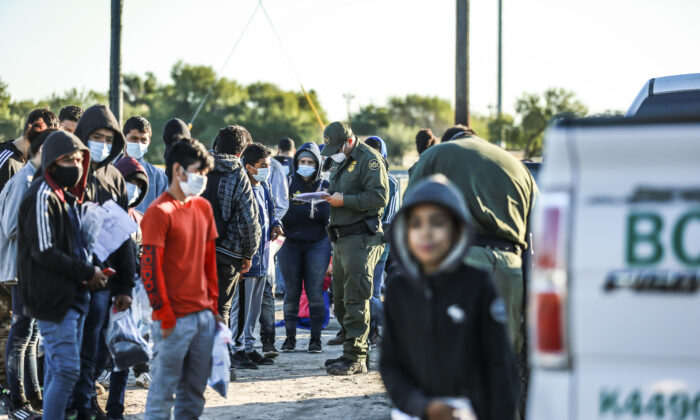 DEL RIO, Texas—Border Patrol agents encountered a record number of unaccompanied children who crossed the southern border illegally and without a parent or guardian in 2021.

From January through December, agents apprehended more than 169,000 children under the age of 18—a record that more than doubled the previous all-time high in 2019, according to Customs and Border Protection data.

The “troubling trend” is continuing into 2022, according to Jason Owens, the Border Patrol chief for the Del Rio sector in Texas.

“From Friday to Sunday, over 70 unaccompanied children have been found traveling alone or with complete strangers. Many tell us they have no idea where their parents currently are!” Owens wrote on Twitter earlier this month.

In some cases, children have been found wandering alone and lost in remote areas of the border after being abandoned. Many had a phone number or address of a contact in the United States written on their hand or on a piece of paper.

In one case, a Texas rancher found five abandoned children on her property. Border Patrol agents found an 8-year-old boy wandering alone in the New Mexico desert. Two toddlers were dropped over the border fence by smugglers. A 6-month-old baby was tossed from a smuggling raft into the Rio Grande between Texas and Mexico.

Border Patrol prioritizes the transfer of minors (under the age of 18), who cross the border illegally without a parent or guardian, to the Office of Refugee Resettlement (ORR), a subset of Health and Human Services.

Currently, on any given day, about 10,000 unaccompanied children are in ORR custody. In April last year, ORR had more than 22,000 children in its care at one time as the border crisis hit a new peak. The volume got so high, emergency shelters were set up in convention centers in Dallas, San Antonio, and San Diego; and California foster parents were asked if they could take in any children from Central America.

The ORR spends about $60 million a week to house the current volume of minors, the vast majority of whom are aged between 15 and 17.

The agency works to place a child with a sponsor within a few weeks, who are also most often in the country illegally. “In more than 80 percent of cases the child has a family member in the United States. In more than 40 percent of cases that family member is a parent or legal guardian,” according to a Health and Human Services email that contains the daily statistics.

“The children then go through immigration proceedings where they are able to present an application for asylum or other protection under the law.”

“I think the influences or increased arrivals really aren’t dependent on the administration or the party that’s in power in the United States at the moment,” Workie told The Epoch Times. She previously worked as a regional spokesperson for the Health and Human Services’ Administration for Children and Families.

Workie said unaccompanied minors are coming to the United States due to economic factors, crime, and climate change in their home countries—mostly from Guatemala, Honduras, or El Salvador. However, she did acknowledge that 80 percent of them having a parent or close family member in the United States was also a pull factor.

“Most of the sponsors and their household members are without immigration status in the United States,” Workie said.

Mark Morgan, former acting Customs and Border Protection commissioner, blamed the Biden administration for the record volume of illegal crossings at the border and for not taking steps to resolve it.

Morgan said the current volume of unaccompanied minors is so high that it’s impossible for ORR to thoroughly vet sponsors before placing children with them.

“They have reduced their vetting to almost nonexistent,” he told The Epoch Times. “They’ll basically do a quick NCIC check with respect to a sponsor to make sure they don’t have a criminal record. That’s it.”

The NCIC is the FBI’s National Crime Information Center, which logs crimes committed in the United States, but not those committed by foreign nationals overseas.

“They do not check a sponsor’s immigration status in this country. So you could be a sponsor that’s in the country illegally. You could have been one of those 600,000 gotaways. You could have a criminal record in your home country,” Morgan said. He referred to the 600,000 illegal immigrants that Border Patrol detected in 2021 but failed to apprehend.

Morgan said “undoubtedly” children are being sent into dangerous situations, including being trafficked.

“There’s no doubt in my mind that’s happening,” he said.

“Open border policies are not only jeopardizing every aspect of our nation’s public safety, health, and national security … but also open borders policies are the most inhumane thing that we could do for the migrants themselves.

“You will have overall an exponential increase in human trafficking because … as they’re being smuggled, many of them are being trafficked at the same time—they just don’t know it yet. They don’t know it until they’ve been released in the United States.”

A report by Axios in September 2021 suggests the number of children that HHS fails to reach within 30 days of placement is more than 30 percent.

Under current laws, minor children from contiguous countries (Mexico and Canada) can be sent back, but those from all other countries cannot be returned to their home country.

The majority of the minors apprehended by Border Patrol in 2021 were from Guatemala, Honduras, Mexico, or El Salvador. Most are between 15 and 17 years.