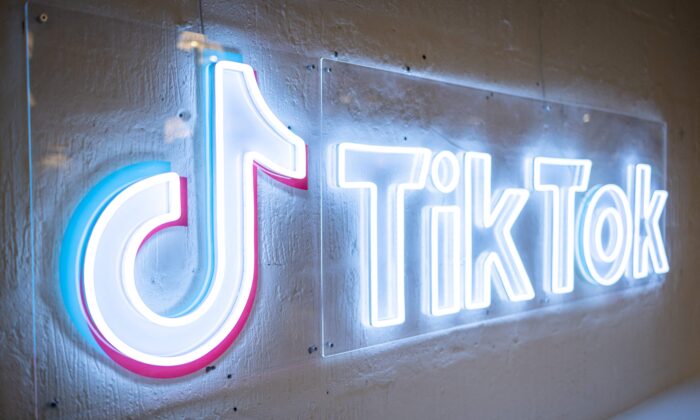 The logo of video-focused social networking service TikTok, at the UK office, in London on Feb. 9, 2022.(Tolga Akmen/AFP via Getty Images)
Social Issues

Taiwanese Teacher Sounds Alarm on Children Being Addicted to TikTok

Students are addicted to TikTok, a Chinese mobile video app, and a variety of anxiety-inducing phenomena are emerging, according to a teacher in Taiwan who recently called out parents to raise serious concerns about what’s happening.

Lin Yichen, a teacher at Taiwan’s Changhua County elementary school, posted an article on March 16 on Facebook titled “Once TikTok rings, parents’ efforts are in vain,” saying that almost all of her sixth-grade class was brainwashed by the popular social network software TikTok.

The article lists six phenomena observed by Lin that parents need to know about. First, when TikTok played a piece of short music, almost the whole class knew the tune. Second, students start writing in simplified Chinese characters, which are used in mainland China, and their language level now is worse than the previous year’s students. Taiwan uses traditional characters that maintain the origin, story, and meaning inherited from 5,000 years of Chinese culture.

The simplification of the Chinese script came in the mid-1950s in mainland China and was one of the Chinese Communist Party’s (CCP) “most poisonous moves to destroy traditional Chinese culture,” Jiang Feng, a China affairs commentator told Sound Of Hope, a U.S.-based Chinese media on Feb. 20, 2020.

Third, parents are reminded to pay attention to their children making friends through the internet. Fourth, it is not advisable for children to watch too many videos, especially those made for adults. Many children said they have seen some and even sang the songs in them. Fifth, pay attention to the physical separation between males and females, children should not make fun of the physical body. Sixth, it’s difficult to quit addiction to excessive use of cell phones, and children can become angry and even turn against their parents.

Lin goes on to say that children probably start cell phone use and lengthy access to the internet in kindergarten but are incapable of identifying the implicit wrong values behind the images and videos they see, and then they end up becoming what they are now.

The article concludes by urging parents to not use their children to test the authenticity of “Once TikTok rings, parents’ efforts are in vain.” The phrase is quickly becoming a buzzword for Taiwanese people mocking TikTok.

Lin’s posting was widely spread, with many comments added to it.

TikTok, also known as Douyin in Chinese, is a Chinese social app that allows internet browsing and sharing of short videos on smartphones that was launched worldwide in 2017.

By the end of 2021, TikTok surpassed Google as the world’s most visited domain on the internet, Forbes reported on Dec. 29, 2021.

TikTok claimed to be appealing to young people as “a music short video community focused on the new generation,” making “personalized” recommendations to each user through a special algorithm according to Changjiang Times on Sept. 11, 2017.

Qu Zheng, former NASA engineer and now professor in the Department of Data Science at Feitian College told The Epoch Times that the so-called “personalized” recommendations identify the user’s personal preferences through data analysis and recommends the products that are most likely to attract the user.

This is an interactive process. If the user accepts the recommended content, it means that the suggested videos are deemed correct, and then TikTok will double down its efforts. “But this algorithm itself does not contain value judgment, so there are positive and negative social effects,” Qu said.

Qu believes that for children who have not yet formed their own worldview and outlook on life, the purported “most likely to attract this user” videos are often those that cause sensory stimulation, and can have pornographic and addictive content.

Content that TikTok promotes is likely what parents and teachers are worried about and warn minors not to access.

TikTok only cares about making money, and the algorithm itself is designed to make people “as addicted as possible,” which is so harmful to teenagers in the rebellious stage, Qu added.

Beijing-based ByteDance, the video-sharing social platform developer of TikTok and Douyin, did not respond to The Epoch Times’ request for comment.

ByteDance is a private company that has set up the CCP organization inside. In 2018, ByteDance had over 100 CCP members and 170 cyber police units stationed at TikTok. In addition, various Party and government agencies, official media, public security police, courts, and other institutions opened administrative accounts in TikTok, according to The Paper, a Chinese official media, on Sept. 14, 2018.