Refusing to Print Dr. Seuss Books Has Nothing to Do With Combating Racism
0
Share Now
TelegramFacebookTweetEmailTellMeWeReddit
Copy Link 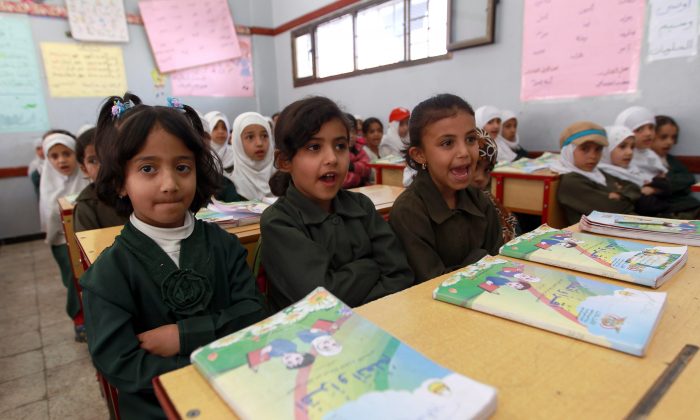 Yemeni schoolgirls attend a class on Feb. 26 at a school in the capital Sanaa. About 76 percent of Yemen's schools have been closed due to the fighting there. (MOHAMMED HUWAIS/AFP/Getty Images)
Opinion

Children Are Paying the Price for Yemen’s War

Hisham Yahya, 13, is an eager student. As we sat in the large, empty yard of his school in Sanaa, Yemen’s capital, with weapon debris scattered about, he said he missed going to class. “I just sit at home, it is so boring, and we have no electricity, nothing,” he said. “I want to go back to school so I can start learning again.”

It doesn’t look like Hisham’s school will be up and running again any time soon.

On March 26, the first day of airstrikes by a Saudi-led international coalition against the Houthi rebels who control the capital and much of the rest of the country, Yemen’s Education Ministry suspended all classes in Sanaa. Many other areas subject to coalition attacks and fighting between the Houthis and other armed groups soon followed suit.

Across Yemen, 3,600 schools—76 percent of the country’s total—have closed due to insecurity, according to the United Nations. As a result, about 1.85 million children cannot take this year’s final exams.

The school closures not only harm children’s access to education but make children more susceptible to recruitment by the many armed groups and tribal militias in Yemen that continue to use child soldiers.

Eighty-one schools have also been damaged in the fighting, UNICEF said. Hisham’s school, the Bilal primary school for boys in the Nuqum neighborhood, escaped relatively lightly, mostly with broken windows. It was damaged on May 11, when a coalition airstrike hit an arms depot on nearby Nuqum Mountain. Thirty-eight civilians were killed, including six children.

During a temporary cease-fire in mid-May, my colleague and I visited three other schools in Sanaa that had been damaged from airstrikes. At the Ibn Sina secondary school for girls, we saw broken windows and a damaged facade. Three airstrikes had destroyed two nearby homes, injuring one man. Local residents thought the school was the intended target because the Houthis had been using it as a base for food distribution.

Some residents thought that the Houthis might have used the school to store weapons, but we found no signs of that. Others said they had checked the school the morning before the strike and directly after it—and each time found no weapons.

The international coalition has said it will attack schools when they’re used for military purposes, as permissible under the laws of war.

The international coalition has said it will attack schools when they’re used for military purposes, as permissible under the laws of war. A Saudi spokesman, Brig. Gen. Ahmed al-Assiri, told the media on April 10 that Houthi militias were using schools to store weapons and equipment. All attacks on schools at that point had come after students had left the building, he said.

At least four schools outside of Sanaa have been directly hit. On April 7, an airstrike hit the al-Rasheedi School in Ibb, killing at least two children and wounding two others, the United Nations reported. On the same day, an airstrike hit a school in the northern Saada governorate, the Houthis’ traditional stronghold, for the second time, destroying it. On May 7, airstrikes hit a school in al-Mahwit governorate. Three days later, the governorate education office in al-Bayda reported that an airstrike had damaged a girls’ school there as well.

In Saada, northern Yemen, we visited the al-Munadil Hussein Fayed School, a secondary school for girls. A man who lives 100 meters (109 yards) from the school said a coalition airstrike hit the school at 8:30 am on May 11, destroying part of it.

He said he heard another strike three minutes later that hit an open area about 200 meters away, and then a third about three minutes after that in another area. He did not know if any Houthi military personnel or equipment was at the school at the time of the attack.

The Houthis have also damaged schools since the fighting began. The vice principal of a primary school attended by 3,500 girls and boys told us that he saw Houthis firing anti-aircraft guns from a military police compound about 300 meters (about 328 yards) from the school, and that weapon fragments punctured one of the school’s two rooftop water tanks during heavy firing on May 11.

We went up to the roof and found a 14.5mm bullet from a heavy machine gun and an unexploded 23mm cannon round. Anti-aircraft weapons commonly use both types of ammunition.

The unexploded cannon round, which we photographed and analyzed, had never been fired, suggesting that the anti-aircraft weapon for which it was intended, or at least the ammunition for such a weapon, was at the school. But we couldn’t confirm this.

The Houthis have certainly used schools for military purposes in the past. During their 2011 uprising in northern Yemen, we reported that both government troops and Houthi fighters had occupied at least 19 schools. In the current conflict, armed groups are occupying at least 56 schools, the U.N. has said.

The laws of war obligate all parties to a conflict to take special care to minimize harm to civilians.

Helping Hisham and other Yemeni children get back to school will be far from easy while the fighting continues. But the laws of war obligate all parties to a conflict to take special care to minimize harm to civilians and civilian structures, and that includes children and schools.

Those governments supporting the coalition or the Houthis should use their influence to help protect education in the country. The cost of failure will be high, measured not only in suffering now but in its lasting impact on Yemen’s future.

Belkis Wille is the Yemen researcher at Human Rights Watch. This article was previously published on Foreign Policy in Focus (fpif.org).