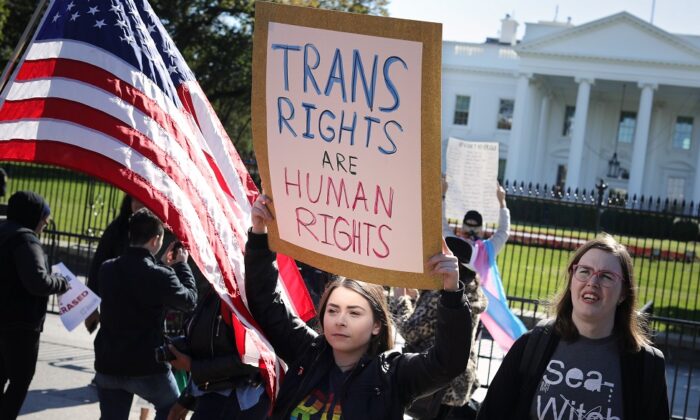 LGBT activists from the National Center for Transgender Equality rally in front of the White House on Oct. 22, 2018. (Chip Somodevilla/Getty Images)
Viewpoints

Children Are Being Influenced by ‘Trans Trends’ 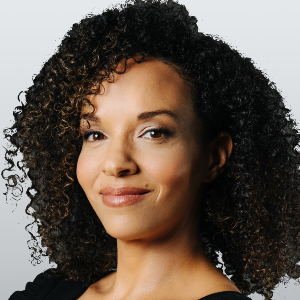 Can you remember the popular trends from your teenage days? Which of them were you caught up in? I can almost hear the groans as readers remember the clothes, hairstyles, and attitudes of their youth. When recalling their not-so-glory days, the oft-repeated slogan of anyone older than 30 is, “I was so dumb back then.”

Don’t misunderstand me. I’m not trying to say young people are dumb. They’re often bright and full of energy. But wisdom, discernment, and the willpower to stand out against the peer pressure of the groups—that’s what young people lack. How easily they are swayed to make themselves look ridiculous with whatever new trend has become popular!

But what if the trends of youth culture could be directed? What if the power of peer pressure could be captured and used as a weapon to transform our country? And what if the media, major corporations, social media influencers, and even our entire compulsory educational system could be geared toward creating trends in our nation’s youth? And what hope would a teenager have against such an onslaught of influence?

Unfortunately, we don’t need to guess “what if,” because this is exactly what’s happening today. A transgender agenda, a “trans trend,” if you will, is being popularized in the minds of our children.

Let’s start with some numbers. Historically, gender dysphoria (when someone claims to be dissatisfied with the gender they were born with) has only affected a tiny percentage of children, less than 0.01 percent, and almost all the cases were boys. Today? The United States has seen a 1,000 percent rise in gender dysphoria, and the UK has reported a more than 4,000 percent rise in girls demanding gender “treatments.” And 70 percent of “sex reassignment” surgeries are done on girls.

What has led to this dramatic shift, not only in the number of children claiming gender dysphoria, but also the about-face of a predominantly male affliction to a female-dominated phenomenon? All of this is too rapid, too dramatic of a change to be explained as a natural occurrence. Something is pushing these trends.

The book “Irreversible Damage” by Abigail Shrier posits that these trans trends are pushed by an informal network of educators, social media influencers, psychologists, politicians, and even doctors. In a review of the book, some of the common themes of social media “trans influencer gurus” are listed: “If you think you might be trans, you are,” keeping secrets about your new trans identity from your parents is encouraged, your parents don’t love you if they don’t affirm your new “identity,” you can try out hormones such as testosterone even if you’re not sure you’re trans, deceiving “doctors is justified if it helps transition,” and so forth. This isn’t just Michael Jackson telling you to drink Pepsi in the ’80s.

Schools are also in on the trans advertising blitz. They’re leading the way. As I covered in a recent Epoch Times article, teachers are being pressured to push the trans agenda under accusations that they’re “emotionally harming” students if they don’t. Administrators instruct teachers to keep trans identity secrets from parents, and the curriculum teaches students as early as kindergarten that there’s a gender spectrum.

The results? Girls are going to gender treatment clinics in groups, giggling in the waiting rooms together, and demanding hormones. Groups. This isn’t normal; it’s an artificial trend. What are the chances that entire groups of friends all happen to be “born with” gender dysphoria? Not likely. These teens act in groups as with other popular trends, not because of some deep and innate sense of being “born in the wrong body,” as trans apologists claim—no, they’re following a crowd.

The response from the radical gender-theory left is to deny that these are peer-pressured and artificial trends of innocent teens being manipulated into thinking that they’re trans by educators and influencers. Instead, they claim that these are organic and genuine cases of gender dysphoria—as if the promotion of these ideas in our youth has nothing to do with the rapid rise in their popularity.

But the left has had no problem recognizing outside influence causing past unhealthy trends in youth. I’ll give two examples. First, Malcolm Gladwell brilliantly documented the rapid rise in teen suicide among males in Micronesia in his book “The Tipping Point,” showing that “in the early 1960s, suicide on the islands of Micronesia was almost unknown,” yet by the 1980s, they had the highest per capita suicide rate in the world. The rate for 15- to 24-year-old males was seven times higher in Micronesia than in the United States.

Almost all of them were copycat suicides, a ritual that became so popular among youth culture that it was “expressed in recent songs composed locally and aired on Micronesian radio stations, and in graffiti adorning T-shirts and high school walls,” Gladwell wrote.

That’s not just individual cases of suicidal depression. That’s a trend. And it shows that unhealthy trends can spread rapidly among highly impressionable youth—even trends as harmful as ritual suicide.

Then, there’s the trend of copycat school shootings, documented by none other than the far-left magazine Mother Jones. The influence of mass media coverage on teen shooters is discussed in an article on the explosion of school shootings after the infamous Columbine tragedy. Did the media cause the shootings? No, of course not. But how many high school students would have thought of such a thing if they hadn’t heard about it first? The article, “Copycat Shooters Motivated by Columbine Keep Multiplying, Our Investigation Shows,” is a tragic reminder of youth subculture run amok.

As these two examples simply show, the dangers of unhealthy teen trends mainly spread organically. How much more dangerous is an astroturf trend pushed by cultural Marxists bent on sowing chaos in society and manipulating our defenseless children?

Suppose fads in youth culture can influence teens to engage in such harmful and unhealthy behavior as mass shootings and ritual suicides. Should we just take the word of a group of giggling girls in a doctor’s office wanting hormone therapy and double mastectomies? Maybe kids don’t always know what’s best for themselves. That’s a radical idea, I know.

It’s no new thing for teens to be manipulated by corporate advertising and celebrities. But now, the result is far worse than that hairstyle you wore in the ’80s or the cost of overpriced dolls or games during the Christmas season. The price is the mangled bodies and distorted minds of our most precious treasure: our children.

Kali Fontanilla
Follow
Kali Fontanilla was a public school teacher for 15 years. Her rebuttal statement to Prop. 16 in California helped stop the push for legal reverse racism and a new extreme version of affirmative action in 2020. She is the co-founder of Exodus Institute, a K–12 online school with a nationally accredited program, at ThinkExodus.org.