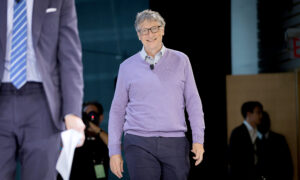 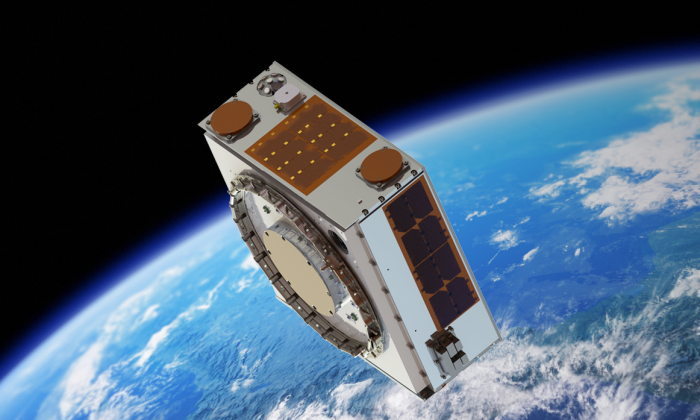 A conceptual image of Target, which is part of an apparatus developed by Astroscale for space debris removal. (Courtesy of Surrey Satellite Technology Ltd.)
Companies

TOKYO—IT industry veteran Nobu Okada’s first venture into the space industry came at the age of 40, when he was going through a midlife crisis at the same time the tech bubble was bursting.

The CEO of Astroscale, the world’s first privately-owned space debris-removal enterprise, recalled at the time his visit to NASA as a 15-year-old, when he received an autograph from Japan’s first astronaut, Mamoru Mohri.

The autograph came with a note to Okada, “Space is waiting for your challenge.”

In the process of researching space through his attendance at seminars and conferences, he came across the issue of space debris, and its potential effects on orbiting spacecraft and satellites.

But the lack of a regulatory authority, available technology, and a commercial market put the issue out of sight and out of mind to other space-industry players.

That life-changing autograph from Mohri now decorates a hallway of Astroscale’s office in suburban Tokyo, where engineers are working on its first debris-capture demonstration mission, called the End of Life Services by Astroscale-demonstration, or ELSA-d.

All eyes will be on the launch, which is scheduled in early 2020.

When Okada first started the venture, there was no such market or commercial awareness of space debris. In his research, he found that while space debris of over 10 centimeters (4 inches) in diameter can be detected from the Earth and hence can be avoided by calibrating a spacecraft’s flight path, smaller undetectable particles are causing substantial damage to orbiting craft.

It was precisely because he was an outsider to the industry that he was undeterred by the boundaries of space.

“I started the business with nothing but blind optimism. I set myself a target on Day 1 that, within seven years, Astroscale would solve the technological issues, develop a working business model, and iron out the regulatory issues regarding space,” Okada said.

“Thankfully, we’ve been on target in clearing our goals, and I’m confident that we’re on course.”

Just last month, Astroscale, which is headquartered in Singapore and has a research center in Japan, announced it raised an additional $50 million in funding to bring its total investment capital to $102 million. The injection comes from funds managed by investment companies, real estate conglomerates, and blockchain funds.

The Japanese-owned company now has a team of around 70 people, mostly engineers, in its offices located in Singapore, Japan, and the UK—for whom watching movies such as Star Wars leaves them imagining how much more space debris is being created with each destroyed X-Wing.

It’s not something that most people would worry about every day, but the issue of space debris has been getting more serious since the first rocket was launched 60 years ago.

Imagine 750,000 pieces of space debris of over a half-inch in diameter circling the earth—at speeds 10 times that of a bullet—and one can understand the safety hazard that the particles pose to an active spacecraft.

In fact, the International Space Station has encountered several near-misses with space debris; in May 2016, a small object hit the station and caused a small crack in a window.

“Government officials and the private sector are now ready to support debris removal as a business,” Odaka said.

Astroscale’s business idea is for public and private satellite operators and space agencies that launch rockets to employ its services, to ensure that each launch doesn’t add to space debris.

The ELSA-d has two stacked parts: a Chaser and a Target, working together to demonstrate a retrieval service for satellite operators.

The Chaser, equipped with a magnetic capture mechanism, will repeatedly release and capture the Target, to show off the technology.

Meanwhile, the Japan Aerospace Exploration Agency is pursuing a special tether technology, similar to a fishing net, to capture and haul space debris into the atmosphere, where the debris would disintegrate upon re-entry. That system failed a field test in 2017.

The current space industry is valued at about $350 billion, according to Bank of America Merrill Lynch, which projects growth to $2.7 trillion over the next three decades.

Technical issues aside, one of the biggest hurdles for the space debris market is the question of who should take responsibility for removing the debris.

Article VIII of the Outer Space Treaty of 1967, a basic international framework of space law, states that “any object in space, regardless of whether it is an active satellite or space debris, belongs to the nation that originally launched it.” This puts a hurdle in the path of active debris removal.

Another hurdle is the potential cost: Each space debris-retrieval mission could cost between $2 billion to $7 billion.

Countering the spirit of that law is that people all over the world benefit from the use of satellites.

Nevertheless, Okada is confident the issue of space regulation will be solved within the next three to five years. Currently, guidelines are set by the United Nations and bodies such as GVF, a non-profit international association of satellite communication industry leaders.

“I think we will see a convergence in global best practices and standards that will facilitate future in-orbit servicing activities in the next three to five years,” Okada said.