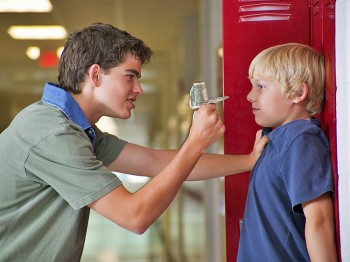 EASY VICTIM? Youngsters with demonstration-avoidance goals show less tendency to retaliate, but were considered more passive, which may increase the bully's willingness to harass. (Photos.com)
Science

Children deal with peer aggression in different ways based on their social goal orientations, according to new research from the United States, which could help develop better interventions or even reduce the incidence of bullying.

Led by psychologist Karen Rudolph from the University of Illinois, the researchers found that children tend to respond to bullying in three different ways, whether consciously or unconsciously.

The study looked at evidence collected from 373 second-grade children and their teachers using questionnaires, and re-examined the children when they reached third-grade.

Children reported whether they had been victims of harassment, how they responded to bullying, and what they thought about their peer relationships. Around half of the children said they had experienced some form of peer aggression.

Those children who are known to have development goals seek to improve social skills and relationships.

“They want to improve their social skills," says Rudolph in a press release. "They want to learn how to make friends."

The children with demonstration-approach goals show their competence and attempt to gain positive judgement from peers.

“These are kids who say: ‘I want to be cool. I want lots of kids to like me. I want to hang out with the popular kids,’” Rudolph explains.

Meanwhile, demonstration-avoidance goals refers to some children’s attempt to avoid negative judgements from peers, also a form of showing competence.

The results also revealed that children with development goals had more positive self-perceptions. They were less likely to react impulsively to bullying, and more likely to engage in proactive problem-solving strategies.

Children who wanted peers to see them as “cool” showed greater negative perceptions of peers, and were more likely to react impulsively to bullying and retaliate.

Youngsters with demonstration-avoidance goals showed less tendency to retaliate, but were considered more passive, which may increase the bully’s willingness to harass.

And those who were bullied in the second-grade were less likely to use problem solving strategies in third-grade. “[They] were more likely to freeze up, or to ruminate about it…” says Rudolph.

Rudolph suggests that by understanding children’s social goals and the dynamics between the victim and bully, more effective preventions to bullying could be formulated and negative consequences of harassment could be reduced.

"Just telling kids, ‘this is what you should do’ might not change their behaviors because their goals might be different from our goals," Rudolph concludes.

"So I think understanding where the kid’s coming from and why they’re actually acting the way they do is going to be crucial for changing their behavior."

The paper is called "Developing Relationships, Being Cool, and Not Looking Like a Loser: Social Goal Orientation Predicts Children’s Responses to Peer Aggression," and was published in the journal Child Development on Aug. 30.