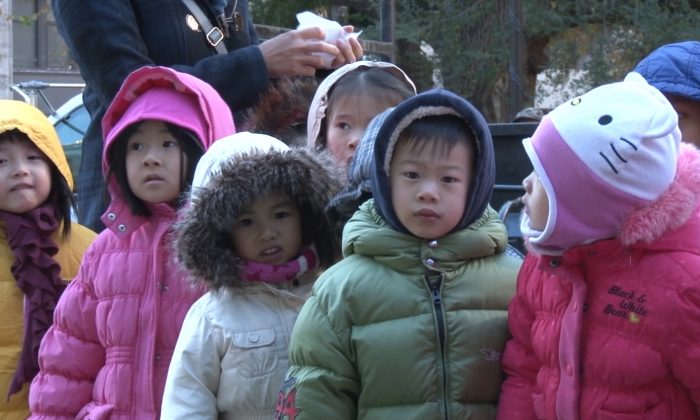 Children line up on the steps of City Hall, New York, on Nov. 13, 2013 to ask Mayor Michael Bloomberg to baseline per-kindergarten programs in the budget. (screenshot/NTD Television)
New York

NEW YORK—For at least one year, childcare services, homeless services, and libraries will be kept off the dance floor for the annual “budget dance.”

Millions in additional funding were base-lined into the fiscal year 2014 budget plan for these critical programs, including nearly $140 million for childcare services. The move came following an announcement by Mayor Michael Bloomberg on Thursday that he would be handing over a balanced budget to Mayor-elect Bill de Blasio due to better than expected tax revenue and cost saving measures.

“Following years of advocacy calling on Mayor Bloomberg to baseline these funds, we are thrilled that his administration has taken an enormous step toward stabilizing New York City’s early childhood education and after-school systems—systems that, despite their proven effectiveness in improving outcomes for children and working families, have consistently faced deep budget cuts and have struggled with the instability and uncertainty caused by one-year funding,” according to a statement from the Campaign for Children, a group of 150 advocacy and provider organizations.

“We are pleased the administration has finally recognized the budget priorities of the Council by base-lining funding for vital programs,” the statement read. “Today’s announcement is an important first step that will help finally end the yearly budget dance and ensure New Yorkers have access to the critical services that they need.”

For the past two fiscal years, childcare and after-school services have been among the programs on the chopping block to keep the budget balanced. The City Council has used its discretionary funding to keep nearly all of the services up and running, however the programs were only guaranteed for a year.

According to the updated planning documents the childcare programs will need additional funding by fiscal year 2015, but that is based on Bloomberg’s priorities. When de Blasio sets the 2014 budget, he can move money to dictate his own legislative priorities.

While he has not come out publicly to say if he would add more funding, childcare was a centerpiece of the de Blasio campaign, including a tax hike to raise taxes on the wealthy to expand pre-kindergarten seats to all children in the city.

There are some programs that will still need help from either de Blasio or the City Council to avoid cuts in the new budget. Firehouses, which have been a part of the annual budget dance for the past several years, still lack roughly $48 million in funding for fiscal year 2014.