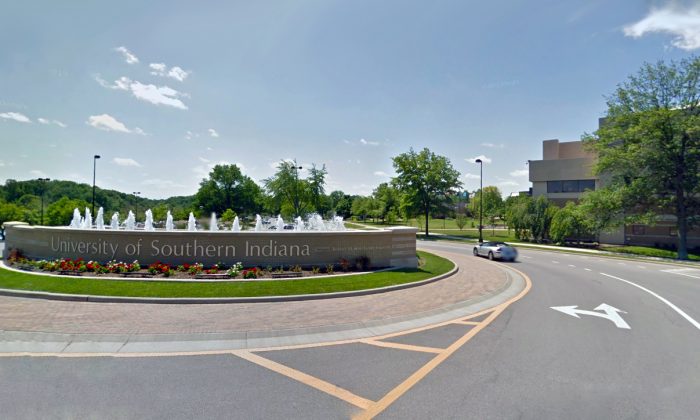 Entrance to the University of Southern Indiana in Evansville, Ind., in May 2012. (Screenshot/Google Maps)
By Richard Szabo

An Indiana father is devastated after discovering his young child died from heat exhaustion in the back seat of the family car on July 9.

Vanderburgh County Sheriff’s Office (VCSO) confirmed with WFIE that Oliver Dill, 3, died on the back seat of a parked car at the University of Southern Indiana’s (USI’s) Evansville campus, 170 miles southwest of Indianapolis.

CORONER: The young boy who died at USI today has been ID’d as 3-year-old Oliver Dill.

JUST IN: Coroner Office releases name of boy who died in hot car at USI >> https://t.co/563xQxEh2F

The father had forgotten to drop Oliver off at USI day care in the morning, locked the car, and left the vehicle parked for several hours, according to the VCSO. When the father returned to the car to pick up Oliver from day care, he made the heartbreaking discovery that Oliver was still in his car seat and not moving.

According to the Vanderburgh County Sheriff, a father forgot to drop off his son at daycare this morning. The sheriff says when the father went to pick up the toddler this afternoon, he realized the boy was still in the car seat. https://t.co/wRSMtulkDN

VSCO told WFIE officers responded to a report of a child left in a car at about 1:45 p.m. local time and discovered Oliver was already dead.

An autopsy was scheduled for the same afternoon and the coroner confirmed the dead child was indeed Oliver.

USI closed its children’s learning center on July 10 and will consider whether to reopen it later this week.

“We understand this will be inconvenient for parents who need childcare but our thoughts right now are in supporting the individuals who are deeply affected by this tragedy and will need some time to process their grief to best support the children in their care,” USI President Dr. Ronald Rochon said in a statement on Facebook.

USI expressed its condolences to Oliver’s family and friends and offered access to counseling services.

“As a parent and the president of the University of Southern Indiana, I am deeply saddened,” Rochon said. “Our deepest condolences go out to the family of this young child, this is a loss no parent should bear. If you have a child in your life, please hug them tight and remember that counseling services are available if you need them.”

A letter from President Rochon to the USI Community: https://t.co/zcMowQxBql

USI said it would provide important updates on the reopening date to the families of children who use the CLC.